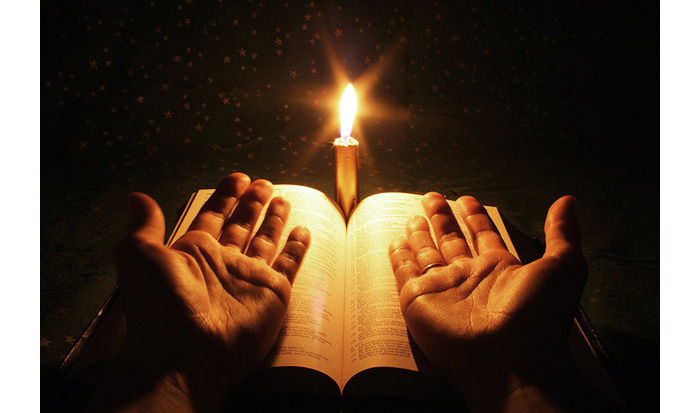 Note: While this three part reflection was written from a Roman Catholic perspective, the material can be beneficial for Christians from other traditions as well. – editor

But now we must confront the most delicate of problems: How are we to approach the Scriptures so as to release the Spirit that they contain? How are we to explain the Scriptures, that is, taking the term literally, how are we to smooth out their folds so that they may indeed exhale the divine fragrance which, by faith, we know is stored within them? I have already said that Scripture is a theandric (i.e., divine-human) reality. Now, the law of any theandric reality (e.g., Christ and the Church) is that the divine element cannot be discovered in it except as it is approached by way of the human. One cannot discover the divinity in Christ except through his concrete humanity.

Those who, in antiquity, claimed to do otherwise fell into Docetism; despising Christ’s body

and human characteristics as mere “appearances” (dokein), they also mislaid his profound reality, and instead of a living God made man, they were left with merely their own idea of God. Similarly, one cannot discover the Spirit in Scripture except through the letter, that is, by way of the concrete human dress that the Word of God has assumed in the various books and inspired authors. One cannot discover the divine meaning in them except by setting out from the human meaning, the intention of the human author: Isaiah, Jeremiah, Luke, Paul, and so forth.

In this process, the immense effort of study and research in connection with the Scriptures finds its full justification. There are hosts of believers who spend their lives in elucidating biblical problems: problems concerning the very text of Scripture, the historical and cultural context of each book, the internal and external sources of the Bible, the exact meaning of each passage, etc. Christians owe these scholars a great debt of gratitude; opening our Bible, without even being aware of their labor, we gather its fruits by the handful and are enriched.

But our enthusiasm is soon veiled in sadness. Again taking the example of the person of Jesus, there was not only the danger of Docetism, neglecting the human; there was also the danger of

stopping short at the latter and not seeing anything in him but the human, not discovering the divine dimension of Son of God. There was, in a word, the danger of Ebionism.

For the Ebionites (who were Jewish Christians), Jesus was indeed a great prophet, perhaps the greatest of the prophets, but nothing more. They did not make the qualitative leap: they were

stuck in the Old Testament although they were living in the New, since they had not grasped the true newness. The Fathers called them “Ebionites” (from ebionim, poor men), meaning that they were poor in faith.

This happens with regard to Scripture too; the risk exists of halting at the letter, of considering the Bible an excellent book, perhaps the most excellent of human books, but a solely human one. In the one case as in the other (i.e., in the case of Docetism as of Ebionism), we are dealing with heresy in the most classic sense of the term, that is, partial choice, breach of unity, impoverishment, and therefore, since God is concerned, sin. The sin of dividing Scripture exists, just as for Paul the sin of dividing Christ exists (cf. 1 Corinthians 1:13).

Unfortunately, we are now experiencing the danger of reducing Scripture to a single dimension. The breach of unity today is based not on Docetism but on Ebionism. We are “poor people,” but with an unhappy poverty, not a blessed one, for there is no worse poverty than to do without God.

of their validity: “How is God’s word read in Christendom? If we were to distinguish two classes (for we cannot here concern ourselves with individual exceptions), one might say that the

Or, to say the same thing in another way, the greater part regard God’s word as an antiquated document which one puts aside, and a smaller part regards God’s word as an exceedingly notable document of olden time upon which one expends an astonishing amount of diligence and acumen.”6 To “admire the mirror” means to confine ourselves to critical problems, to the letter of Scripture.

Many scholars expounding the Bible deliberately confine themselves to the historico-critical method, and this not only outside the Church, within the various critical and liberal schools (which has been going on since the eighteenth century), but inside the Church as well, among many exegetes who profess to be believers and Catholics. The secularization of the sacred has nowhere revealed itself so acutely as in the secularization of the sacred Scriptures.

Yet, to claim to understand Scripture exhaustively by studying it exclusively with the instrument of historico-philological analysis, is like claiming to discover what the Eucharist is through

a chemical analysis of the consecrated host. Historico-critical analysis, even when carried to the heights of perfection, only represents the first step in knowledge of the Bible, the step concerning the letter.

that the prophets and psalms and all the Scriptures speak of him (cf. Luke 24:27, 44; John 5:39). The Fathers were convinced that “the Son of God is implanted everywhere throughout the Scriptures.”7 But nowadays so-called scientific exegesis hesitates to speak of Christ, no longer discerns him in virtually any passage of the Old Testament or, at least, is nervous of saying that he can be discerned there, for fear of being written off as “unscientific.”’

The most serious drawback of a certain kind of excessively scientific and “objective” exegesis is that it completely alters the relationship between the exegete and the Word of God. The Bible

becomes an object which the professor has “mastered” and before which (like any scientist) he or she is neutral, whereas in this unique case it is neither permissible to stay neutral, nor is it given to anyone to master the subject, since we have to let it master us. To say that a believer-scholar has mastered the Word of God, is, properly speaking, to utter a blasphemy. To act thus with the Word of God is “as if a rod could sway him who lifts it, or a staff him who is not wood” (lsaiah 10:15).

The consequence of all this is the closing up and folding in of Scripture on itself. It goes back to being the “sealed” book, the “veiled” book, for – says St. Paul – the veil is taken away through

Christ whenever a person “turns to the Lord,” recognizes Christ in the pages of Scripture (cf. 2 Corinthians 3:15-16). What happens with certain very sensitive plants that fold their leaves as soon as they are touched by a foreign body, or with certain shells that close their valves to preserve the pearl they have inside, also happens with the Bible. The pearl of Scripture is Christ.

In short, we witness a sort of self-defence on the part of the Word of God; it rejects the foreign body that ventures on to its ground out of mere curiosity. It is like (I am only making a comparison!) the angel of the Lord repulsing Heliodorus, flinging him to the ground, scourging him, and enveloping him in “great darkness” when he entered the Temple of Jerusalem to steal its treasures (2 Maccabees 3:24f.).

It is hard otherwise to explain all the crises of faith among biblical scholars, some of whom have even ended by leaving the sacred ministry. Talking to one of them, I was amazed at his inability

to perceive any truly divine and supernatural dimension in Scripture. When we wonder why spiritual poverty and aridity dominate some of our seminaries and training establishments, it

does not take long to realize that one of the main reasons is the way Scripture is being taught in them. The Church has lived and lives by the spiritual interpretation of the Bible; cut off this canal which nourishes the devout life, zeal, and faith, and everything dries up and withers. Even the liturgy loses its meaning or comes to be experienced as something quite divorced from one’s own cultural life, since the liturgy is entirely constructed on a spiritual interpretation of Scripture.

Having seen these things for myself, I now understand why St. Paul wrote that, of itself, “the letter brings death” (2 Corinthians 3:6), and I also understand those terrible words bequeathed by our Father, St. Francis, to us Friars Minor in one of his admonitions:

This is the second of a three part series on The Spiritual Interpretation of the Bible:

Fr. Raniero Cantalamessa, O.F.M. Cap. (born July 22, 1934) is an Italian Catholic priest in the Order of Friars Minor Capuchin. He has devoted his ministry to preaching and writing. He is a Scripture scholar, theologian, and noted author of numerous books. Since 1980 he has served as the Preacher to the Papal Household under Pope John Paul II, Pope Benedict XVI, and Pope Francis. He is a noted ecumenist and frequent worldwide speaker, and a member of the Catholic Delegation for the Dialogue with the Pentecostal Churches.