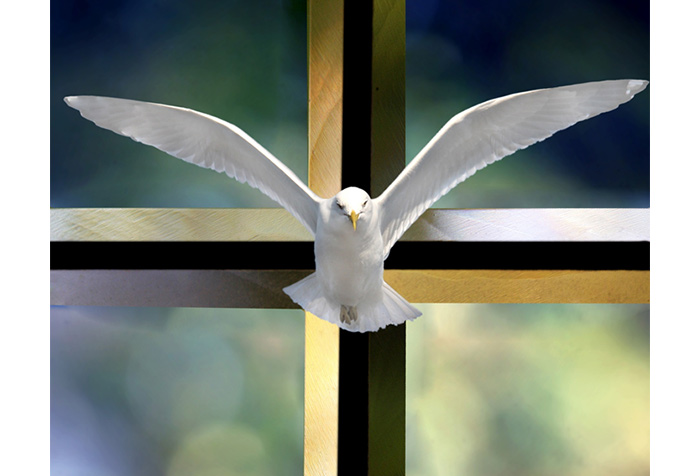 Note: While this three part reflection was written from a Roman Catholic perspective, the material can be beneficial for Christians from other traditions as well. – editor

I should like to begin this meditation by adopting St. Francis of Assisi’s opening words in his Letter to all the Faithful: “I am the servant of all and so I am bound to wait upon everyone and make known to them the fragrant words of my Lord”1 He calls Christ’s words “fragrant,” thereby implicitly comparing them to sweet-smelling, newly baked bread, and we shall see in this meditation that this is exactly what God’s words are: fragrant with the Holy Spirit.

In the Second Epistle to Timothy we find the famous statement: “All Scripture is inspired by God” (2 Timothy 3:16). The expression translated as “inspired by God” in the original Greek is one single word, theopneustos, which combines two words, “God” (theos) and “Spirit” (pneuma). This word has two basic meanings, one well known and another habitually neglected yet no less important than the first.

Let us begin with the well-known meaning. This is the passive meaning, emphasized in all modern translations: Scripture is “inspired by God.” Another passage in the New Testament explains what this means: “Human beings [i.e., the prophets], moved by the Holy Spirit spoke under the influence of God” (2 Peter 1:21). This is, in a word, the classic doctrine of the divine inspiration of Scripture, which we proclaim in the Creed as an article of faith when we say that the Holy Spirit is he “who has spoken through the prophets.”

This doctrine carries us back to the very source of the whole Christian mystery, which is the Trinity, the unity of and distinction between the three divine Persons. The Holy Spirit accompanies the Word just as, in the bosom of the Trinity, the breathing of the Holy Spirit is bound up with the begetting of the Word. As, at the incarnation, the Spirit enters Mary so that the Word will become flesh within her, so, in an analogous though not identical way, the Spirit works within the sacred writer, so that he can welcome the Word of God and “incarnate” it in human language.

This in itself mysterious event of inspiration we can represent for ourselves in human imagery: with his divine finger (i.e., his living energy), which is the Holy Spirit, God touches that hidden point where the human spirit opens to the infinite, and from there that touch (in itself very simple and instantaneous, as is God who produces it) is diffused like a sonorous vibration through all the human faculties (will, intelligence, imagination, emotion), translating itself into concepts, images, and words. Human beings “moved by the Holy Spirit spoke under the influence of God”: the mysterious transition occurs from divine motion to created reality, which can be observed in all the ad extra works of God: in creation, in the incarnation, in the production of grace.

The result thus obtained is a theandric reality, fully divine and fully human, the two intimately fused together, though not “confused.” The magisterium of the Church (the encyclical letters Providentissimus Deus of Leo XIII and Divino afflante Spiritu of Pius XII) tells us that the two realities – divine and human – are maintained intact.

God is the principal author of Scripture since he is responsible for what is written, determining its content by the activity of his Spirit. Nevertheless, the sacred writer is also the author in the full sense of the word, since he has intrinsically collaborated in this act by means of a normal human activity which God has used as an instrument.

God, the [early church] Fathers used to say, is like a musician who by touching the strings of the lyre makes them vibrate; the sound is entirely the work of the musician but it would not exist were it not for the lyre-strings. In the case of Scripture, the mystery consists in the fact that God moves not inert, inanimate strings, but free ones (the will, the intelligence) which are capable of moving themselves. Only he can move such strings as he pleases while still maintaining their freedom intact and therefore acting through them.

Of this marvellous work of God, only one effect is usually emphasized: the inerrancy of Scripture, that is to say the fact that the Bible contains no error (if by “error” we mean the absence of a truth humanly possible in a given cultural context and hence one to be demanded of the writer).

But biblical inspiration is the basis for much more than the mere (negative) inerrancy of the Word of God; positively, it is the basis for its inexhaustibility, its divine force and vitality, and what St. Augustine called its mira projunditas, its marvellous depth.

The active inspiration of the Word of God

So now we are ready to investigate that other, lesser-known meaning of biblical inspiration. In itself, grammatically speaking, the participle theopneustos is active, not passive, and if it is true that tradition and theology have alike always explained it in a passive sense (“inspired by God”), it is also true that the same tradition has found an active significance in it too.

Scripture, said St. Ambrose, is theopneustos not only because it is “inspired by God” but also because it”respires God,” because it breathes God.2 It is, St. Francis would say, the fragrance of God. Speaking of the creation, St. Augustine says that God did not make things and then turn his back on them, but that they “are from him and also in him.”3 The same is true of God’s words: having come from God, they remain in him and he in them.

Having dictated Scripture, the Holy Spirit is, as it were, contained in it, lives in it, and enlivens it unceasingly with his own divine breath. The conciliar constitution Dei Verbum also picks up this thread of tradition; it says that “the sacred Scriptures, inspired by God [passive inspiration!] and committed to writing once and for all time, present God’s own Word in an unalterable form, and they make the voice of the Holy Spirit sound again and again in the words of the prophets and apostles” [active inspiration!].”4

There are inspirations that move our will to the good, illuminations that clear our mind, our deepest emotions. … To what can we compare the word of Scripture? St. Gregory the Great wondered, and then replied: It is like a flint, cold to the touch, but when struck by the steel it gives off sparks and lights the fire. The words of Scripture stay cold if one limits them to their literal meaning, but if, inspired by the Lord, one strikes with an attentive mind, they will give vent to the fire of mystic meanings.5

“More delightful is your love than wine” – a personal testimony

I once heard a man give this testimony in public: He had reached the last stage of alcoholism; he couldn’t hold out for more than an hour or two without a drink; wherever he happened to be, travelling, in the train, or at work, his first thought was where could he get some wine. His wife, who was there too, said she had reached the brink of despair and could see no way out for herself and her three children, except death. Someone invited them to some Bible readings.

There was one word in particular which, heard by chance, made a deep impression on him and which for many years served as a rope to draw him up from the abyss. Each time he read it over, it was like a fresh flood of heat and strength, until he was completely cured. When he tried to tell us what that word was, his voice broke and he was so overcome with emotion that he could not manage to complete the sentence. It was the verse in the Song of Songs (1:2) which says, “More delightful is your love than wine.” It would have been easy for any “expert” on the Song to show him that the verse had no bearing on his situation and that he was deluding himself, but the man went on repeating, “I was dead and now I am alive. That word gave me back my life!” So, too, the man born blind replied to those who questioned him, “How that may be, I don’t know. All I do know is, before I couldn’t see and now I can see” (cf. John 9:25).

This is the first of a three part series on The Spiritual Interpretation of the Bible:

Fr. Raniero Cantalamessa, O.F.M. Cap. (born July 22, 1934) is an Italian Catholic priest in the Order of Friars Minor Capuchin. He has devoted his ministry to preaching and writing. He is a Scripture scholar, theologian, and noted author of numerous books. Since 1980 he has served as the Preacher to the Papal Household under Pope John Paul II, Pope Benedict XVI, and Pope Francis. He is a noted ecumenist and frequent worldwide speaker, and a member of the Catholic Delegation for the Dialogue with the Pentecostal Churches.