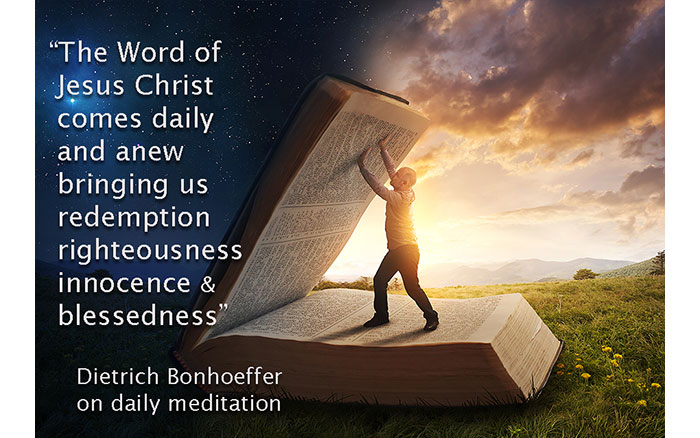 The Word of Christ comes daily and anew

Because they daily hunger and thirst for righteousness, they long for the redeeming Word again and again. It can only come from the outside. In themselves they are destitute and dead. Help must come from the outside; and it has come and comes daily and anew in the Word of Jesus Christ, bringing us redemption, righteousness, innocence, and blessedness. But God put this Word into the mouth of human beings so that it may be passed on to others. When people are deeply affected by the Word, they tell it to other people.

God has willed that we should seek and find God’s living Word in the testimony of other Christians, in the mouths of human beings. Therefore, Christians need other Christians who speak God’s Word to them. They need them again and again when they become uncertain and disheartened because, living by their own resources, they cannot help themselves without cheating themselves out of the truth.

At the same time, this also clarifies that the goal of all Christian community is to encounter one another as bringers of the message of salvation. As such, God allows Christians to come together and grants them community.

(excerpted from Life Together, Chapter One)

Speaking God’s Word to our brothers and sisters in Christ

Wherever the service of listening, active helpfulness, and bearing with others is being faithfully performed, the ultimate and highest ministry can also be offered, the service of the Word of God.

This service has to do with the free word from person to person, not the word bound to a particular pastoral office, time, and place. It is a matter of that unique situation in which one person bears witness in human words to another person regarding all the comfort, the admonition, the kindness, and the firmness of God.

This word is threatened all about by endless dangers. If proper listening does not precede it, how can it really be the right word for the other? If it is contradicted by one’s own lack of active helpfulness, how can it be a credible and truthful word? If it does not flow from the act of bearing with others, but from impatience and the spirit of violence against others, how can it be the liberating and healing word?

… Who wants to accept the responsibility for having been silent when we should have spoken? The orderly word spoken in the pulpit is so much easier than this totally free word, standing responsibly between silence and speech…

We talk to one another about the help we both need. We admonish one another to go the way Christ bids us to go. We warn one another against the disobedience that is our undoing. We are gentle and we are firm with one another, for we know both God’s kindness and God’s firmness.

Why should we be afraid of one another since both of us have only God to fear? Why should we think that another Christian would not understand us when we understood very well what was meant when somebody spoke God’s comfort or God’s admonition to us, even in words that were inept and awkward? Or do we really believe there is a single person in this world who does not need either comfort or admonition? If so, then why has God given us the gift of Christian community? …

Being a servant of Jesus Christ and his Word

The community of faith will place its confidence only in the simple servant of the word of Jesus, because it knows that it will then be guided not by human wisdom and human conceit, but by the word of the good shepherd.

The question of spiritual trust, which is so closely connected with the question of authority, is decided by the faithfulness with which people serve Jesus Christ, never by the extraordinary gifts they possess.

Authority in pastoral care can be found only in the servants of Jesus who seek no authority of their own, but who are Christians one to another, obedient to the authority of the Word.

(excerpted from Life Together, Chapter 5)

Top image: Illustration of a man opening the Bible in the morning sunlight, © by Kevin Carden, from ChristianPhotoshop.com, with Bonhoeffer quote added

Dietrich Bonhoeffer was a German Lutheran pastor and a founding member of the Confessing Church. He was the first of the German theologians to speak out clearly against the persecution of the Jews and the evils of the Nazi ideology. In spring of 1935 Deitrich Bonhoeffer was called by the Confessing Church in Germany to take charge of an “illegal,” underground seminary at Finkenwalde, Germany (now Poland). He served as pastor, administrator, and teacher there until the seminary was closed down by Hitler’s Gestapo in September,1937.

In the seminary at Finkenwalde Bonhoeffer taught the importance of shared life together as disciples of Christ. He was convinced that the renewal of the church would depend upon recovering the biblical understanding of the communal practices of Christian obedience and shared life. This is where true formation of discipleship could best flourish and mature. Bonhoeffer’s teaching led to the formation of a community house for the seminarians to help them enter into and learn the practical disciplines of the Christian faith in community.

In 1937 Bonhoeffer completed two books, Life Together and The Cost of Discipleship. They were first published in German in 1939. Both books encompass Bonhoeffer’s theological understanding of what it means to live as a Christian community in the body of Christ. He was arrested by the Gestapo in April 1943. On April 8, 1945 he was hanged by the Gestapo as a traitor in the Flossenburg concentration camp. As he left his cell on his way to execution he said to his companion, “This is the end – but for me, the beginning of life.”