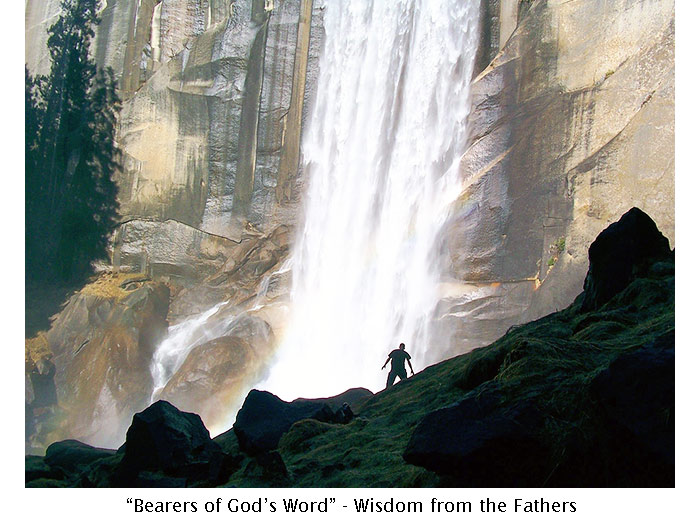 Lord, who can comprehend even one of your words? We lose more of it than we grasp, like those who drink from a living spring. For God’s word offers different facets according to the capacity of the listener, and the Lord has portrayed his message in many colors, so that whoever gazes upon it can see in it what suits him. Within it he has buried manifold treasures, so that each of us might grow rich in seeking them out.

The word of God is a tree of life that offers us blessed fruit from each of its branches. It is like that rock which was struck open in the wilderness, from which all were offered spiritual drink. As the Apostle says:

And so whenever anyone discovers some part of the treasure, he should not think that he has exhausted God’s word. Instead he should feel that this is all that he was able to find of the wealth contained in it. Nor should he say that the word is weak and sterile or look down on it simply because this portion was all that he happened to find. But precisely because he could not capture it all he should give thanks for its riches.

They ate spiritual food and they drank spiritual drink.

Be glad then that you are overwhelmed, and do not be saddened because he has overcome you. A thirsty man is happy when he is drinking, and he is not depressed because he cannot exhaust the spring. So let this spring quench your thirst, and not your thirst the spring. For if you can satisfy your thirst without exhausting the spring, then when you thirst again you can drink from it once more; but if when your thirst is sated the spring is also dried up, then your victory would turn to harm.

Be thankful then for what you have received, and do not be saddened at all that such an abundance still remains. What you have received and attained is your present share, while what is left will be your heritage. For what you could not take at one time because of your weakness, you will be able to grasp at another if you only persevere. So do not foolishly try to drain in one draught what cannot be consumed all at once, and do not cease out of faintheartedness from what you will be able to absorb as time goes on.

Ephrem, also known as Ephraem the Syrian, was born around the year 306 AD, in the city of Nisibis (the modern Turkish town of Nusaybin, on the border with Syria). Internal evidence from Ephrem’s hymnody suggests that both his parents were part of the growing Christian community in the city, although later hagiographers wrote that his father was a pagan priest. Numerous languages were spoken in the Nisibis of Ephrem’s day, mostly dialects of Aramaic. The Christian community used the Syriac dialect. Various pagan religions, Judaism and early Christian sects vied with one another for the hearts and minds of the populace. It was a time of great religious and political tension. The Roman Emperor Diocletian had signed a treaty with his Persian counterpart, Nerses in 298 that transferred Nisibis into Roman hands. The savage persecution and martyrdom of Christians under Diocletian were an important part of Nisibene church heritage as Ephrem grew up.

James (Mar Jacob), the first bishop of Nisibis, was appointed in 308, and Ephrem grew up under his leadership of the community. Ephrem was baptized as a youth, and James appointed him as a teacher. He was ordained as a deacon either at this time or later. He began to compose hymns and write biblical commentaries as part of his educational office. In his hymns, he sometimes refers to himself as a “herdsman”, to his bishop as the “shepherd” and his community as a “fold”. Ephrem is popularly credited as the founder of the School of Nisibis, which in later centuries was the centre of learning of the Assyrian Church of the East (i.e., the Nestorians).

Ephrem lives most of his life in Nisibis, but moved to Edessa in 363, where most of his works were written. He was a prolific writer of Scripture commentaries, homilies, and hymns. His works are in verse and, and he composed over 70 hymns for the liturgy. After residing 10 years in Edessa, Ephrem reposed in peace in his sixties, according to some in the year 373, and according to others, 379. (bio source from orthodoxwiki.org).