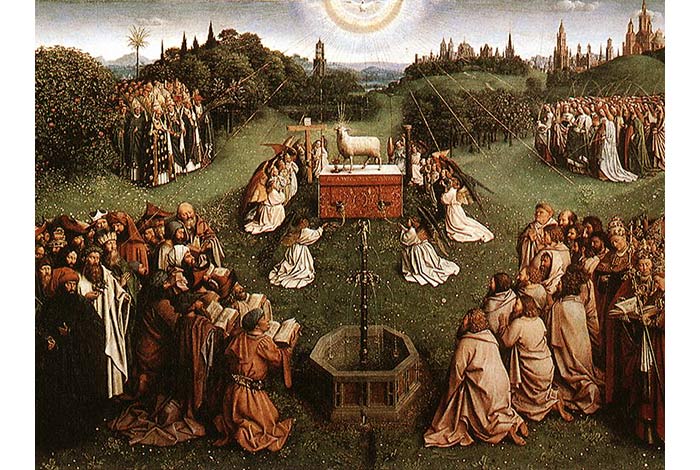 “Like a tree planted by streams of water” (Psalm 1:3), the soul is irrigated by the Bible and acquires vigor, produces tasty fruit, namely, true faith, and is beautified with a thousand green leaves, namely, actions that please God. The Bible, in fact, leads us towards pure holiness and holy actions. In it we find encouragement to all the virtues and the warning to flee from evil.

The Bible is a scented garden, delightful, beautiful. It enchants our ears with birdsong in a sweet, divine and spiritual harmony, it touches our heart, comforts us in sorrow, soothes us in a moment of anger, and fills us with eternal joy. Let us knock at its gate with diligence and with perseverance.

Let us not be discouraged from knocking. The latch will be opened. If we have read a page of the Bible two or three times and have not understood it, let us not be tired of re-reading it and meditating on it.

Let us seek in the fountain of this garden “a spring of water welling up to eternal life” (John 4:14). We shall taste a joy that will never dry up, because the grace of the Bible garden is inexhaustible.

Brief bio of John of Damascus

John of Damascus, also known as John Damascene, was born in 676. He was brought up in Damascus Syria in a Christian family living under Muslim rule. His father was a government official under both the Byzantine emperor and the Muslim rulers of Damascus. John received a classical education. His fields of interest and contribution included law, theology, philosophy, and music. He was fluent in Arabic as well as Greek. John worked in the Muslim court until the hostility of the caliph toward Christianity caused him to resign his position, about the year 700.

He moved to the vicinity of Jerusalem and became a monk at Mar Saba Monastery located in the Judaean desert hills near Bethlehem, 18 miles southeast of Jerusalem. He taught in the monastery, preached many sermons in Jerusalem, and wrote both theological treatises and hymns.

Since he lived in the midst of political and theological turmoil, John wrote a great deal to clarify true doctrine and to do his part in spreading the gospel. He is recognized as one of the principal composer of hymns in Eastern Orthodoxy. His most important theological work, The Fount of Wisdom, is a summary of Eastern theology. He was a key defender of the use of icons during the iconoclast controversies.

John is considered the last of the Greek church fathers and the first of the East to formulate a comprehensive synthesis of Christian Dogma. John died in 749. He worked to the very end and was beloved by his fellow monks and revered by the people. He was buried at the Monastery of Mar Saba.