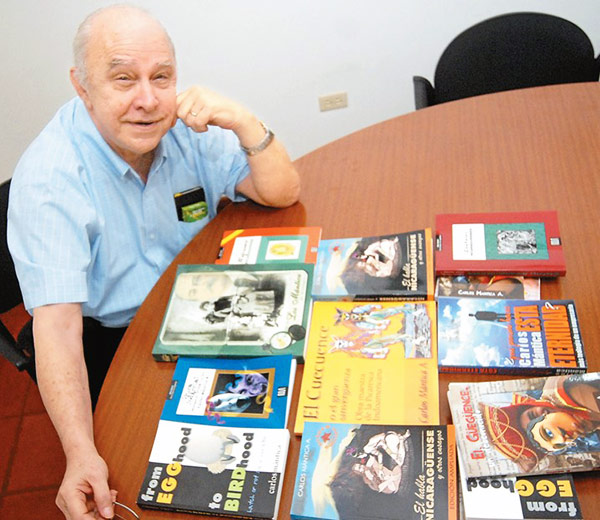 I have personally known Chale Mantica since 1975. During those 35 years I have experienced many encounters, dialogues, e-mails, personal confidences, consultations, and other shared times with Chale. It should be no problem for me to write about this man – how can I not forget anything about this multifaceted man?

To begin with such a rich personality, I cannot resist quoting some of his achievements: Member of the Nicaraguan Academy of Language; National Advisor to the Cursillo de Cristiandad Movement; successful businessman in the not at all easy world of business in Nicaragua; personal advisor on religious and civil issues, a leading figure in Nicaragua; a poet, musician, and writer. It is obvious that the history of Nicaragua, if it wants to be fair, truthful and complete, from whatever angle it is viewed, must make mention of Mr. Carlos Mántica Abaunza.

While this brief list is surely incomplete, I will focus on certain profiles of his personality…

Beginning in 1965, when Chale came to personally know Christ as his Lord, Chale’s life was completely turned around. Christ now became the first and greatest importance and center of his life. The Cursillo de Cristiandad Movement, the Charismatic Renewal, and the Sword of the Spirit have each been great beneficiaries of this passionate man of God. His books, conferences, retreats, reflections, show what for Chale was most vital: the personal experience with God, his heavenly Father, his close friend, and personal confidant, but also his Lord, the Almighty One and Creator, who is his Maker and God.

I have been by visibly moved by Chale’s tears when he talks about his relationship with God the Father, and his Lord Jesus Christ, and the Spirit who surrounds him! These are genuine tears that shout personal experience, intimate contact, the joy of knowing that you are forgiven and loved by God, and the joy of being able to forgive others. These are tears of Life.

The example of his docility to the Holy Spirit was manifested in his deep reflection, humble prayer in tongues, and prophetic words and senses he ventured to speak to others.

This is the basic thing in Chale, that is to say, the fundamental thing, the “conditio sine qua nom”, as the Latinos would say; the helm of his not easy life; the star that has guided him in his many “nights of the soul” –  and the reason for the inner and outer peace he conveyed, even in the face of strong personal, family, professional, political, social and religious waves.

The Apostle John was always ready to speak to his disciples about the Love of God. Chale, likewise, was always ready to speak of Christ and the love of the Father with many people, whether through his numerous talks and teaching community courses, or in pastoral conversations with individuals, and even while playing his guitar with friends. He was both normal and extraordinary in speaking to others about Christ.

I saw in Chale the perfect conjunction of being both a brother and a friend to many others. The Word of God says that a good friend is a treasure. If I were to write a treatise on true friendship, Chale would be my first example, especially after my thirty-five-years of experiencing Chale as a dear brother and friend who was truthful, direct, faithful and loyal, without emotionalism, but knowing how to laugh and cry with others as well. Chale could be demanding with his friends because he demanded a lot of himself in being a brother and friend. One day Father Victoriano, his great and intimate friend for many years, told me that God had given him the embodiment of the true theory of friendship in the person of Chale.

The concept and importance of covenant community which Chale taught came from his personal experience of the covenant which he learned from Christ. Probably one of Chale’s community concerns for the City of God and Sword of the Spirit, is the real possibility of drifting away from this reality, which for him is basic, fundamental, and inescapable. It was the unbreakable covenant of three men, Enrique, Bayardo and himself, that established a stable foundation for the Ciudad de Dios (City of God) community in Managua.  What is so crucial today for the Sword of the Spirit, especially after the serious crisis of the nineties? The covenant that God has with each of the members and with each other, both in local community and the wider community of communities. Chale has been a profound spokesperson for covenant. We saw in him the embodiment of one of God’s dreams for these times: a community fundamentally living unwavering covenant love together.

In my homeland in Spain, the theme of “historical memory” is in vogue, which in the end is becoming a new confrontation and a manipulation of history itself – with lies and intentional forgetfulness of the past. Thank God this does not happen in the historical memory of my other homeland – the Sword of the Spirit.  But we can fall, without ill will, into certain unforgivable forgetfulness if we do not pass on to new generations the history of our origins, which clearly expresses the determined will of God for this people and the audacity of his love.

We must remember the role that God assigned to Chale in the difficult times we went through in the nineties. He took the helm of a ship that was adrift, with the attitude of the psalmist who feels “consumed by zeal for the house of God.” He did not hesitate to make serious decisions, from his deep convictions, which made the ship arrive at a safe harbor. To him is due the beginning of the Ibero-American Region of the Sword of the Spirit, whose unity and strength has been a blessing for the wider Sword of the Spirit. He conceived the community vision and mission retreat, which has served to define the identity of our communities. From his vision also emerged the document called “macroschema”, a key piece in understanding the formation of our communities. Chale’s privileged mind has been life insurance in our community journey. Our history could not be understood without it. Thanks, Chale!

Hopefully this brief reflection on Chale will serve to continue thanking God for the love shown to us through his call to men like Chale.

Don Chale is one of the greatest blessings the Lord gave to the Sword of the Spirit. When our community, Jésed (in Monterey, Mexico), faced a difficult crisis, he was our outside coordinator, who gave us great help during that time. He carried us forward, and he trained me as a community leader. I remember his instruction and correction was full of love and insistence.

When Chale came to Monterrey he stayed at my house and the whole family admired him and loved him very much. When we got to go to Managua we stayed at his home, where we could appreciate him as a loving husband. His wife, Doña Miriam, loved him and she loved us. At each visit we were overwhelmed with so much love. He was also admirable as a dad. He was our adoptive dad.

Don Chale, was a man of God, full of abilities, cultured, brilliant and with that humility that characterized him and that the Lord used to heal, liberate and fill you with peace with his permanent smile. When we talked about the Lord his face lit up. He was charismatic, spiritual and contemplative.

With all our love, Manuel and Adriana De Urquidi.