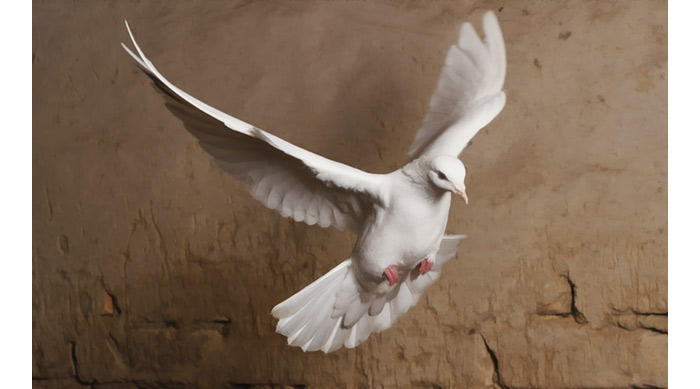 Paul says, “We ought not to please ourselves.” Do you know what I’ve learned? I’ve learned that every time I do anything effective for God that’s acceptable to Him, I begin by not pleasing myself. I’ve discovered this is an inevitable rule: every time I’m pleasing myself, I’m doing nothing that’s worth anything to God. The first thing I’ve got to do is deny myself. This ego in me that is always asserting itself, saying, “I want, I wish, I feel, I think, If you ask me …That’s what I like …” has got to be denied. I have to say, “No!” …

This principle of taking up our cross and denying ourselves daily is the exact opposite of the way our natural mind works. It’s diametrically opposed to the way the natural man thinks. I’d like to give you one or two other Scriptures which I find very challenging, very searching. The first Scripture I’ll give, without going into the background or analysing the content, is 1 Corinthians 1:25:

It’s never been an effort for me to be strong in my own personality. Furthermore God has blessed and used the strength I have. But God has shown me that it will only take me so far. If I wish, I can stop there. I am not compelled to go any further. I’ve seen many lives and ministries stopped at that point.

Now let’s turn to another verse that touches on this – Romans 8:9:

In the King James Version this verse is strangely punctuated. It consists of two sentences separated by a full stop. If I had been responsible for the division into verses, I’d have made two separate verses out of these two sentences. As it stands, the first half of the verse speaks about “the Spirit of God”; the second half speaks about “the Spirit of Christ.” I don’t wish for a moment to suggest that there is any kind of division between these two; but I do believe there is a difference in the way that they represent the nature of God.

The Spirit of Christ

All through the Bible “the Spirit of God” is identified with “the Holy Spirit.” It is the official title of the third Person of the Godhead – God the Spirit – the One who is co-equal with the Father and the Son and who speaks in the first person as God. For example, in Acts 13:2, the Holy Spirit spoke to the leaders of the church at Antioch and said, “Separate me Barnabas and Saul for the work whereunto I have called them.” Here we have God Himself – God the Spirit – using the pronoun “I,” speaking in the first person as God. The main emphasis is upon power and authority.

On the other hand, I believe “the Spirit of Christ” presents the divine nature specifically as it was manifested in the life of Jesus Christ. It cannot be separated from the nature and personality of Jesus. It is this kind of Spirit, Paul tells us, that marks the true child of God: “If any man have not the Spirit of Christ, he is none of his.”

I believe – in fact, I know from direct observations – that there are many people who have been baptised in the Holy Spirit, who speak in tongues, who work miracles – but who demonstrate little or nothing of the Spirit of Christ. And the mark that makes us God’s is not speaking in tongues, nor is

We hear a good deal of teaching about claiming your inheritance, and getting what belongs to you. I’ve preached along that line many times myself, using such texts as the third epistle of John, verse 2: “Beloved, I wish above all things thou mayest prosper and be in health even as thy soul prospereth.” Thank God, I believe it! But do you know, in God’s sight you don’t prosper by asserting your rights. The Spirit of Jesus did not lay claim to His rights. I believe prosperity, health, and inward peace and well-being of soul are the right of the new creation; but many times they are illegally appropriated by the old man for his own selfish purposes.

Today when I hear people say, “Brother, just claim it,” something in me winces. When I hear those words, inwardly I picture an arrogant ego asserting its rights. How many of you would really like to live with somebody who’s always “just claiming it”? Although all my claims may be fully legal, yet I am inwardly weary of the legalistic assertion of my inheritance in Christ.

I am weary, too, of continually having to instruct Christians on how to be healthy and how to prosper. Sure they need it, but brother and sister, when you learn how to be healthy and how to prosper, you are not out of primary school, spiritually. Your strength isn’t what you have or what you can demonstrate. Your strength is the ability to bear the infirmities of the weak. Now the Spirit of Christ was a spirit that freely yielded. Indeed, I believe He’s the supreme example of yielding. It was just this aspect of His conduct that most clearly marked the difference between Him and Satan. It says in Philippians 2:6 about Jesus:

Who, being in the form of God, thought it not robbery to be equal with God.

That is the King James Version. But the New American Standard Bible says, “He did not regard equality with God a thing to be grasped.” Do you see we have a complete specific contrast? Jesus was entitled to equality with God. It was His by divine nature, by divine right. He did not grasp at it. Lucifer, who became Satan, was not entitled to equality with God, but he did grasp at it, and he fell. The decisive point of difference was between grasping and yielding. I am exercised in my mind as to how much of our assertion and claiming and demanding is the expression of the Spirit of Christ and how much rather comes from the other source.

I’m convinced that the charismatic movement is going to have to face this issue. We are going to have to discern between true and false prophets, true and false ministries, those who are serving God in Spirit and truth, and those who are not. Miracles are not the decisive point of difference. The mark that separates is the Spirit of Christ: “If any man have not the Spirit of Christ, he is none of His.”

Do you know what I believe about the charismatic movement? I believe it’s just an interval between two waves. One wave has been going out, another wave is coming in. In between there’s a mess, isn’t there? A churning up, a lot of dirt and mire churned up, a kind of confusion, two forces going in opposite directions. That’s the charismatic movement! It’s not God’s ultimate. Believe me, something else is coming which is going to be orderly, disciplined, Christ-honouring, and it’s going to promote humility, brotherly love, and each esteeming others better than himself.

As far as I’m concerned the day of God’s individual man of faith and power is on the way out. I say that without being critical of any man who may ever have qualified for that title. We need to realise that God works in different ways at different times. He doesn’t go on forever doing the same thing. Some Christians are not prepared to accept that. They find a success formula, it works, and they go on until they’ve worked it to death.

I’m reminded of what Paul said to the men of Athens in Acts 17:30. Speaking about their many, many centuries of idolatry, he said, “The times of this ignorance God winked at.” To wink is to close your eyes for a brief moment. So for a brief moment God voluntarily overlooked that ignorance.

Derek Prince (1915–2003) was born in India of British parents. Educated as a scholar of Greek and Latin at Eton College and Cambridge University, England, he held a Fellowship in Ancient and Modern Philosophy at King’s College. He also studied Hebrew and Aramaic, at Cambridge University and the Hebrew University in Jerusalem. While serving with the British army in World War II, he began to study the Bible and experienced a life-changing encounter with Jesus Christ. Out of this encounter he formed two conclusions: first, that Jesus Christ is alive; second, that the Bible is a true, relevant, up-to-date book. These conclusions altered the whole course of his life, which he then devoted to studying and teaching the Bible.

1 thought on “The Spirit of Christ”