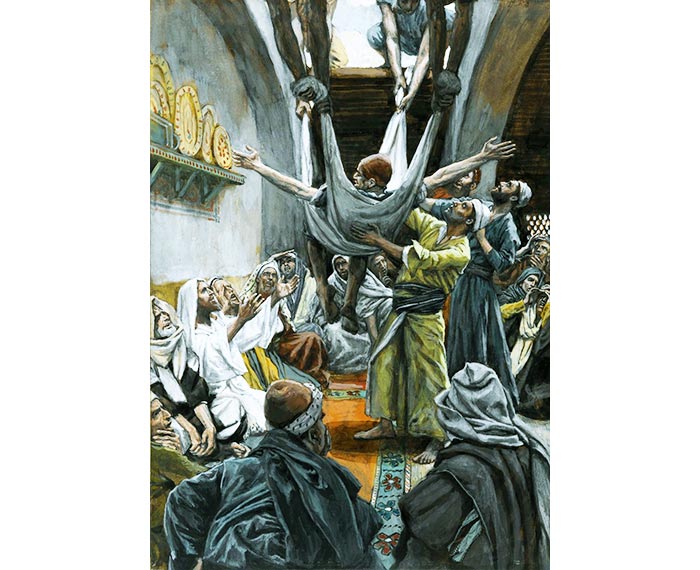 The power of faith is enormous. It is so great that it not only saves the believer: thanks to one person’s faith others are saved also.

The paralytic at Capernaum did not have faith. But the men who brought him to Jesus and let him down through the roof had it. The soul of the sick man was ill as well as his body. That is made clear in the Gospel: “And when Jesus saw their faith he said…, ‘Rise, take up your pallet and go home.’” The Gospel does not speak of “his” faith but of “their” faith. The stretcher-bearers believed and the paralytic had the benefit of being healed because of it. (Mark 2:1-11)

Then there is the death of Lazarus. Four days had passed. His dead body was already decomposing. How could one who had been dead for so many days believe and himself ask for the Deliverer? He could not possibly do so, but his sisters provided the faith for him. When they met the Lord, one sister fell down at his feet.  He asked, “Where have you laid him?”  The other sister said: “Lord, by this time there will be a bad smell.” Then the Lord said, “If you believe you will see the glory of God.”  As if to say, “As regards faith, you must take the place of the dead man.” And the faith of the sisters succeeded in calling Lazarus back from the hereafter. (John 11:1-44).

So if these two women by believing in place of the other were able to secure his resurrection, how much more certainly will you be able to secure it for yourself by your own faith in Jesus?

Perhaps your own faith is feeble. Nevertheless, the Lord who is love will stoop down to you, provided only you are penitent and can say sincerely from the depths of your soul: “Lord, I believe. Help my unbelief.” (Mark 9:23).

If You Believe, He Who Welcomed the Thief  Will Welcome You Also
by Cyril of Jerusalem, 315-386 AD

Faith is the assent of the soul to a truth. If you want to know what advantage the soul gains from it, listen to what the Lord says:

“Whoever hears my word and believes him who sent me, has eternal life; he does not come into judgment, but has passed from death to life.” [John 5:24]

How truly great is the goodness of God to the human race!

The righteous in ancient times, in order to find favour with God, had to struggle for many years. They achieved it after having served God for long and with heroic efforts; Jesus grants it to us in an instant.
It is true. If you believe that Jesus Christ is Lord and that God has raised him from the dead, you will be saved. Jesus on the cross on Calvary welcomed the thief to Paradise. He will welcome you also.

“They ask,’ Add faith to us.’ They do not ask simply for faith, for perhaps you might imagine them to be without faith. They rather ask Christ for an addition to their faith and to be strengthened in faith.

Faith partly depends on us and partly is the gift of the divine grace. The beginning of faith depends on us and our maintaining confidence and faith in God with all our power. The confirmation and strength necessary for this comes from the divine grace. For that reason, since all things are possible with God, the Lord says that all things are possible for him who believes (Mark 9:23).

The power that comes to us through faith is of God. Knowing this, blessed Paul also says in the first epistle to the Corinthians, ‘For to one is given through the Spirit the word of wisdom, to another the word of knowledge according to the same Spirit, and to another faith in the same Spirit’ (1 Corinthians 12:8). You see that he has placed faith also in the catalog of spiritual graces. The disciples requested that they might receive this from the Savior, contributing also what was of themselves. By the descent upon them of the Holy Spirit, he granted it to them after the fulfillment of the dispensation. Before the resurrection, their faith was so feeble that they were liable even to the charge of being ‘little of faith.’”

Excerpt from Commentary of Luke, Homilies 113-16

“Look at the birds of the air,” says Jesus. [Luke 12:24] What a splendid example for our faith to follow!

If God’s providence bestows an unfailing supply of food on the birds of the air who neither sow nor reap,
we ought to realize that the reason for people’s supply running short is human greed.

The fruits of the earth were given to feed all without distinction and nobody can claim any particular rights. Instead, we have lost the sense of the communion of goods, rushing to turn these goods into private property.

The birds do not know famine because they do not claim anything specially for themselves and neither do they have any envy of others.

“Consider the lilies of the field: not even Solomon in all his glory was arrayed like one of these. If God so
clothes the grass which is alive today and tomorrow is cast into the oven, how much more will he clothe one of you!” Listen to these stupendous and uplifting words.

With this parable of flowers and grass the Lord urges us to hope that God will also be merciful to us.

Nothing is more persuasive than a glance at unthinking creatures who have received such beautiful dress from providence. Surely we should be all the more ready to believe that human beings, if they entrust themselves completely to God and free themselves of all their worries, will not lack anything.

Top illustration: The Palsied Man Let Down through the Roof (Le paralytique descendu du toit), by James Tissot, from The Life of Christ series painted between 1886 and 1884, and purchased by public subscription in 1902 for The Brooklyn Museum of Art, USA. This image was uploaded by the Brooklyn Museum in partnership with Wikimedia Commons.