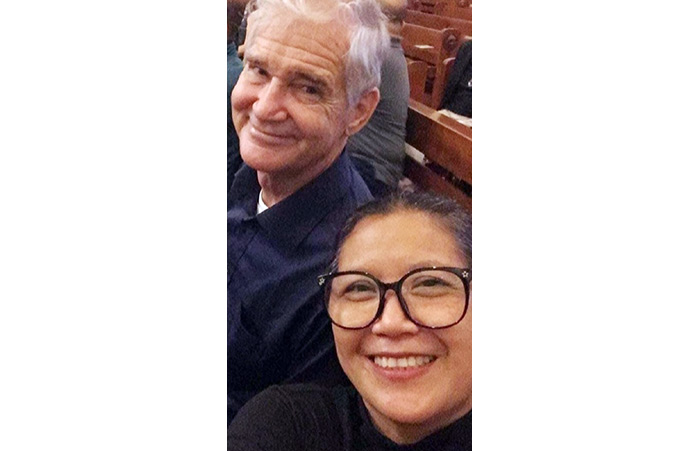 A testimony by Cristie Bradshaw

33 years ago, when I agreed to marry Todd, a Protestant, my father refused to walk me down the aisle. But Todd and I were fortunate to have the support of our community, Ligaya ng Panginoon (Joy of the Lord). Entering into an ecumenical marriage deepened my understanding of Christian unity. I had first-hand experience of how ecumenical love and acceptance could transform our lives. I especially treasure my in-laws, Mac and Rhoda Bradshaw, who accepted and embraced me as their Catholic daughter-in-law, respected my beliefs, and encouraged me to be a better Catholic. They were the coolest Protestants that I have ever met!

Mac and Rhoda had served as a missionary couple in Thailand for 25 years. They then went back to Philadelphia and bought their dream house. One morning, my mom-in-law was in the kitchen, and she heard the Lord say to her very clearly: Go to Manila. She rushed to the bedroom where my father-in-law was praying and found him dumbstruck on the side of the bed. She asked if the Lord had spoken to him. He said, “Well, yes. He said, Go to Manila.” They could not see how that might be, but in obedience they began to pray, and within the year God made it happen.

They moved to Manila, rented a large house which happened to be in the same compound where the fledgling Ligaya community had a small office. There they met Fr. Herb Schneider, SJ, who invited them to a prayer gathering that Sunday. It was Ligaya’s first community anniversary (1976), and my parents-in-law realized that, with the international time difference, the Lord had summoned them to Manila at the same moment that, half a world away, He had said to the first members of Ligaya: “You are my joy.”

The Bradshaws became the first Protestant family to join Ligaya; a few others from their home church of Union Church of Manila soon joined as well. As for me, the die was cast for my future as part of a wider ecumenical family.

This article and photo is excerpted from © The Sword of the Spirit reflections for the Week of Prayer for Christian Unity January 18 – 25 2023.

Cristie Bradshaw is a member of the Ang Liagya ng Panginoon community in Manila, Philippines.