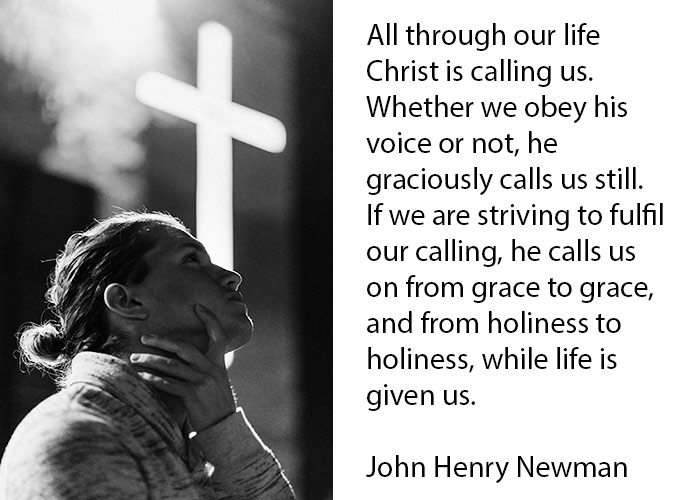 [Note: Minor changes, including capitalization style, were made to allow the text to be more accessible to modern readers. Sub-headings were also added. This excerpt is from a sermon titled, Divine Calls. editor]

Called on from grace to grace

All through our life Christ is calling us. He called us first in Baptism; but afterwards also; whether we obey his voice or not, he graciously calls us still. If we fall from our Baptism, he calls us to repent; if we are striving to fulfil our calling, he calls us on from grace to grace, and from holiness to holiness, while life is given us.

Abraham was called from his home, Peter from his nets, Matthew from his office, Elisha from his farm, Nathanael from his retreat; we are all in course of calling, on and on, from one thing to another, having no resting-place, but mounting towards our eternal rest, and obeying one command only to have another put upon us. He calls us again and again, in order to justify us again and again, – and again and again, and more and more, to sanctify and glorify us.

It were well if we understood this; but we are slow to master the great truth, that Christ is, as it were, walking among us, and by his hand, or eye, or voice, bidding us follow him. We do not understand that his call is a thing which takes place now. We think it took place in the Apostles’ days; but we do not believe in it, we do not look out for it in our own case. We have not eyes to see the Lord; far different from the beloved Apostle, who knew Christ even when the rest of the disciples knew Him not. When He stood on the shore after His resurrection, and bade them cast the net into the sea, “that disciple whom Jesus loved said to Peter, It is the Lord” (John 21:7).

Now what I mean is this: that they who are living religiously, have from time to time truths they did not know before, or had no need to consider, brought before them forcibly; truths which involve duties, which are in fact precepts, and claim obedience. In this and such-like ways Christ calls us now.

Do you hear and accept Christ’s call to you today?

There is nothing miraculous or extraordinary in his dealings with us. he works through our natural faculties and circumstances of life. Still what happens to us in providence is in all essential respects what his voice was to those whom he addressed when on earth: whether he commands by a visible presence, or by a voice, or by our consciences, it matters not, so that we feel it to be a command. If it is a command, it may be obeyed or disobeyed; it may be accepted as Samuel or St. Paul accepted it, or put aside after the manner of the young man who had great possessions.

Top image: Man contemplating the call of Christ, photo by KEEM IBARRA on Unsplash. Free to use under the Unsplash License.

John Henry Newman, 1801-1890, was an influential writer and a major Church of England figure in the Oxford Movement. In 1845 he became a Roman Catholic priest and was made a Cardinal late in life in 1879. He was beatified in 2010 by Pope Benedict XVI in Birmingham, England, near the Oratory where Newman lived and died, and declared a canonized saint in 2019.