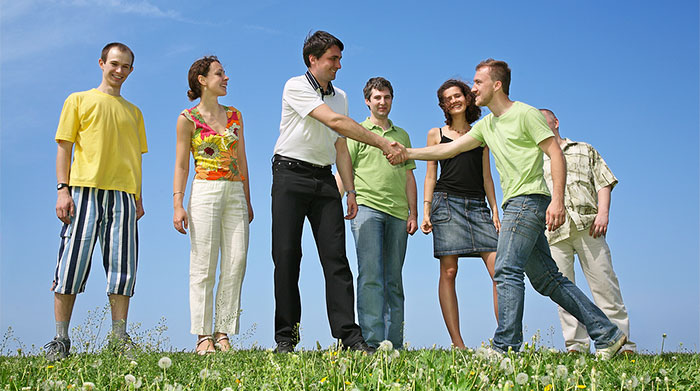 One of the best ways of being open about our faith is to bring others into contact with fellow Christians. I call that bridge building. As individuals we lack all the human and spiritual resources needed to lead and help others into a full life in Christ. Only the body of Christ is sufficient for that task. In this chapter our focus is on how to put people in contact with a Christian environment.

We sometimes underestimate the importance of social groups and the potency of their influence on belief and behavior. Some psychologists subscribe to a theory spearheaded by the renowned psychologist, B.F. Skinner, that environmental factors exclusively shape human action. While this view wrongly excludes free will, it rightfully perceives that we are shaped to a great extent by our environment. In fact, our values, beliefs, clothing styles, and patterns of speech are powerfully influenced by the human circles in which we travel.

It is important, then, to use the life of the body of Christ to help win men and women more fully into the kingdom. This truth has foundational implications for the work of evangelism. We see its preeminence in the early church.

And fear came upon every soul; and many wonders and signs were done through the apostles. And all who believed were together and had all in common; and they sold their possessions and goods and distributed them to all, as any had need. And day by day, attending the temple together and breaking bread in their homes, they partook of food with glad and generous hearts, praising God and having favor with all the people. And the Lord added to their number day by day those who were being saved.

It is no accident that thousands were affected by a group of believers and were eventually added to their number. The Acts of the Apostles contains frequent examples of the influence of a body of disciples. Yet, because this kind of full body life is uncommon among modern Christians, it is often overlooked in the process of personal evangelism. Where it’s working right, however, it provides a key link in helping others respond to Christ.

In fact, of the easiest ways to be open about our Christianity is to simply invite others into our Christian circles. For example, a group in my town sponsors a weekly Christian professional men’s breakfast. About one hundred men attend each week. The event is designed to attract businessmen to the Lord and to support them in their Christian walk. Regular attendees invite non-Christians as well as Christian friends. Through this simple breakfast outreach, many businessmen have come into a deeper relationship with Christ. In this case, a simple invitation is the key step needed for personal evangelism. The individual Christian doesn’t have the total burden of converting and disciplining another, but can merely introduce him to a compelling Christian environment.

There are many examples of such spiritual bridge-building. It is well for us to take stock of the Christian environments we can use to help others in their Christian life. Perhaps our own home provides a powerful Christian witness. In his book Disciples Are Made – Not Born, Walter A. Henrichsen recommends that Christians invite potential or recent converts to their homes for meals and participation in family life. He recounts the impact of this involvement in his own life: “Bob W. Wheeler, a carpenter by trade, was the person who led me to Christ many years ago. One of the most significant things he did was to involve me in his family life. His home was my home. I always felt welcome. I cannot recall how many times I ate at his table, but I know I virtually ate him out of house and home!”

We can invite others to share the warmth and fellowship of our church, prayer groups, or Bible studies. Not only will they receive spiritual nourishment, but they will also experience the power and vitality of Christian love. It was the firsthand experience of a large, joyous, affectionate group of Christians that motivated my search for spiritual renewal. I had never seen so much love expressed among so many different types of people. I concluded that they were either odd ducks or that they really had found some secret. I went on to search for and discover that secret.

If you give a little thought to bridge building, you will discover many such bridges. You might invite someone to lunch with your Christian friends, to a regular soccer game, to parties, barbecues, or concerts. The key is to provide a means of contact with other Christians. Such environments work best when you have already established natural relationships with other Christians yourself.

Natural activities and relationships are often the very best opportunities for extending invitations to outsiders. One group which I know of formed a softball team to compete in the city league. Most of the men were members of the same Christian group. They purposefully left open a few spots for some of their non-Christian friends. The Christian men had deep and affectionate relationships. Their love for one another was obviously expressed by their enthusiasm and mutual encouragement. One could quickly observe the absence of profanity and negativity among them. Moreover, they were good ball players.

The men played weekly, and most of their families were present at the games. Afterward they would gather at someone’s house for an outdoor barbecue. The few non-Christian men along with their families participated regularly and were given specific and warm attention by the Christian players, who were, in fact, praying for them and discussing among themselves how best to evangelize them.

The game and barbecues were not a pretext for speaking constantly about Christianity. Only infrequent remarks were made about spiritual matters. Yet the process strongly affected two of the men, who later joined a Bible study hosted by two of the Christian families. Eventually, these men became Christians. Later, the men cited the ball games and barbecues as the most influential ingredient in their own conversion. They were quick to perceive the joy and depth of their Christian teammates and were motivated by that observation as well as by the warm initiative of the Christian men. Vital kingdom relationships were instrumental in drawing these men into that same kingdom. It was not the work of a single man, but the work of a group of men. It was not the witness of a single life, but the corporate witness of the body of Christ. What a single worker could not do was done by men living and working together – giving witness to the new life which comes from Christ.

I have personally observed this principle of bridge-building many times in the past several years. I have found that one of the easiest and most natural ways of being open about my Christian life. None of us, including myself, is able to meet every need. I have found that the body of Christ is God’s answer to the needs of many individuals. This resource is a key ingredient in personal evangelism.

If we have formed committed relationships with other Christians, it will be easy for us to introduce those we are evangelizing to key individuals and to invite them to various Christian activities. For instance, if you are evangelizing a physician, it might help to introduce him to a Christian physician you know. Whenever you recognize your own limitations in helping a particular person, try to connect them to someone uniquely able to help them. I remember a couple of instances in which I was trying to evangelize someone much older than myself. I found that it helped to arrange dinner and golf for my guest and myself with some older Christians.

What about evangelizing people of the opposite sex? This kind of evangelism can pose some of its own potential hazards. It can help to build bridges with someone of the same sex as the person you are evangelizing. With the help of other brothers and sisters, you can truly be “all things for all men” (and women).

If we want to bring others into contact with a larger Christian environment, it is important that we develop friendships with those we are trying to reach. No evangelist better demonstrated this principle than Jesus himself. “He ordained twelve, that they should be with Him, and that He might send them forth to preach” (Mk 3:14). He ordained them not just for service, but to be with him. Jesus ate, slept, traveled, and spent a great deal of personal time with his disciples. If our evangelistic efforts are to bear fruit, we must be committed to make friends and spend time with those we are trying to bring to Christ. Personal relationships in redeemed environments are the bread and butter of basic evangelism. Our aim is not to sell a product or to ensnare pagan victims, but to extend the “fragrance of the knowledge of him everywhere. For we are the aroma of Christ to God among those who are being saved and among those who are perishing, to one a fragrance from death to death, to the other a fragrance from life to life” (2 Corinthians 2:14-16). What is this fragrance if not the real affection and love that Christ himself has for men?

If we maintain friendships with people, we can continue to invite them into our circles, be available to offer advice, and recommend helpful books and tapes to them. Diligent follow-up insures our sensitivity to the working of the Holy Spirit. Our own faithful persistence offers a kind of spiritual protection from the strategic wiles of the devil. I make it a regular practice to stay in touch with people enough so that further invitations are not stilted and so that I don’t offer advice in an ill-informed way.

Invitation, friendship, and follow-up when operating within the context of a larger Christian environment are normally indispensable in leading men and women into a full Christian life. An honest analysis of our relationships might motivate us to strengthen our own ties to a Christian environment. In personal evangelism, we must recognize that our evangelistic success depends critically on access to the body of Christ and to the head, Jesus.

[This article is adapted from the book, Person to Person: How to be effective in evangelism, © 1984 by Jim Berlucchi, and published by Servants Books, Ann Arbor, Michigan, USA.]

Jim Berlucchi is the Executive Director at Spitzer Center for Ethical Leadership. He formerly served as the Executive Director of Legatus, an international association of Catholic CEOs. He served for many years as a community leader in The Word of God and The Sword of the Spirit. He and his wife Judy reside in Dexter, Michigan, USA. They are the grateful parents of eight children and enjoy a steadily increasing number of grandchildren.