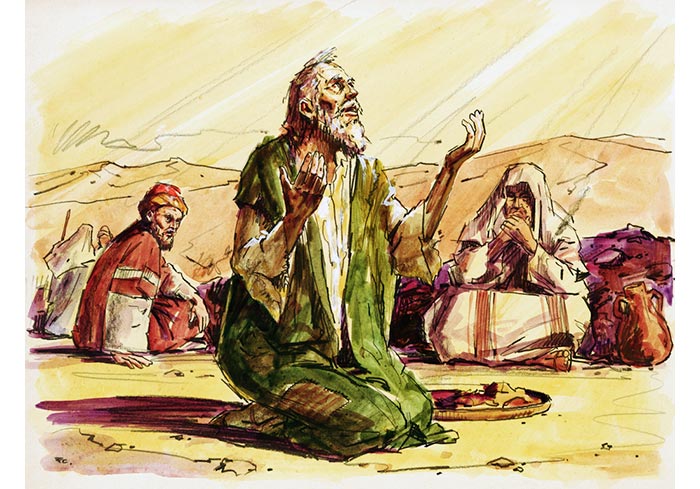 Intro: Scripture is embued with poetric verse and prose, history and prophecy, wisdom and instruction. Peter Damian Coyle has masterfully adapted the Book of Job to poetic verse and rhyme. Job is considered one of the earliest books of the Bible. The message of Job is as relevant today as it was for the ancient seekers of God many thousands of years past. – ed.

2
Before the celestial throne angels again assembled
And Lucifer again re-joined the vast ethereal sheen.
The braver angels hissed at him as others trembled.
God again probed Lucifer: “Where have you been?”

“I was visiting men,” Lucifer in coolness declared
“Roaming around kingdoms to take their measure.”
God replied: “Have you noted how Job has fared?
Unlike other men Job has made virtue his treasure.

He truly fears God and he holds on to all My laws.
Even after all your provocations, he is without sin,
Though you would bury him without a just cause.”
But Lucifer turning dark, exclaimed “Skin for skin!”

Becalmed and brightened he said: “For all they own
Men will trade their life. But stretch out Your hand,
And smite his flesh- He will curse You to the bone.”
So God once again gave Job unto Lucifer’s remand.

God said “Let it be so, but Job’s life shall be spared.”
So Lucifer left Zion, and smote Job with an ill strain:
His body was covered in boils that pulsed and blared,
He took some clay shards and cut at his sores in pain.

Job’s wife spoke up, “Still you struggle to do right?
Coward! Curse God now so you will finally perish!”
Job replied: “Fool! We take God’s gift with delight-
We will receive from Him what we do not cherish.”

And in dire sufferings Job sinned not by day or night.
When news of his misfortunes spread across the land,
So Eliphaz the Temanite plus Zophar the Naamathite
And Bildad the Shuhite heard set off as a small band.

As they arrived they identified their friend half dead,
They barely recognized him and in horror they wept.
Robes torn, they took the dirt putting it on Job’s head.
Seven days and nights they sat in a silence they kept.

3
After seven days Job cursed the very day he was born:
“May the day I was born wither and cease! The night
They announced a boy should now be forever forlorn.
May both end in darkness, unknown to God or light.

Gloom claims that night and cloud ensconces that day.
Let the total eclipse of the sun startle it in great fear.
I hoped that the shadow had stolen that night away!
I wish that date counted not in the days of the year.

That night must forevermore be vacuous and barren,
Let no chants or songs ever be heard during that day.
May curses descend on that day wake the Leviathan.
Let the morning star grow dark and no longer display.

May it wait for the daylight and never see the dawn;
That night shut not the doors of my mother’s womb,
Nor shielded grief from the eyes of the woebegone.
Why was I not stillborn? Why lie I not in my tomb?

Why did my father take me or a mother give me care?
Even in shadow I would have found peace and solace.
I would have lain asleep among countless kings there
And among those who rebuilt ruins into a vast palace.

I would have dwelt amid golden princes or holy men.
I could have been spared misery as a miscarried child,
Like babes who never see the sun or a mountain glen,
In the dark the godless cease, the weary are reconciled.

There are no oppressors in the darkness or any slave.
Both strong men and weak are held in equal esteem.
Must I dwell among the living and not in my grave?!
Why must I shoulder this burden with weary scream?

My life has been brought down to mere toil and pest
Yet in this bitter anguish I find no end for my grief.
I wait here for the end yet death scorns my request
Though I do earnestly seek it, death denies me relief.

But I would be joyful to reach the end of all my days!
Why am I afforded a life in such stale and bitter state?
Is there a path before me? Food and drink only abrase
Whilst I weep and moan, my life is become stagnate.

Now my fears have arrived and they have overtaken
Me and the thing I did dread has now truly occurred
And in my desolation I am comfortless and forsaken
I have no respite as evils encompass me like a herd.”

4
At this Eliphaz the Temanite looked to Job and said:
“Is it worth debating you while you endure such pain?
Yet I cannot keep silence, for although you have fed
Many in wise ways and humbled many who are vain

You steadied the stumbling, strengthened the weak
But now in your affliction you have become jaded.
This sorrow and grief have consumed your physique.
Righteousness was your armour but it has all faded.

Whom among the innocent did never suffer or ache?
Have you or I known the innocent to be destroyed?
As the wicked sow and reap, pain haunts their wake,
By the breath of God sinners are brought to the void.

God always brings the brute to a miserably swift end,
A lions roar seeking prey, but in a while it is broken
Once it dies its cubs are bereft, and it cannot contend.
I have more wisdom for I heard great secrets spoken.

I heard it whispered as troubling thoughts caused riot.
Amid tremors and shaking I perceived a shady figure.
And in the whistling winds I discerned a voice quiet,
“Can a man be more righteous than his own maker?

Can a man be counted just before He who made him?”
God spares not sainted angels from righteous wroth,
Will he then account us mankind pure for his whim?
For our lives are dust and we perish like lowly moth.

Men will die in dire droves from dawn until dusk;
We cease forever while the sun shines on so bright.
Can wisdom prevent a life from being so brusque?
Can any man justify his ways and always be right?

5
Call out and will you receive a response or reply?
Fools trip up in a rage, in envy the stupid stumble.
When I see the foolish man pass I let my curses fly
For all his family will soon see their lives crumble.

The fool will die outside the city without a friend,
Sly men sliding in to steal his harvest and goods,
Stealing all of his grain from his own dividend
While other knaves seek his wealth in the woods.

Suffering rises not up from the ground or the soil.
But in man’s heart trouble is but a sure guarantee.
Are you different? You seek justice in your toil?
But God is beyond compare and can part the sea.

As for me, unto the Lord I will commit my cause,
For though the sparks of men’s hearts fly and soar,
God is steadfast in good and upholding just laws
And it is He alone whom I will worship and adore.

At His hand rain falls to earth and sustains the field.
He loves the destitute and poor, giving them succour
While thwarting evil schemes which bear no yield
And upon the wicked misfortunes may often occur.

They seek the light by day and they clutch at noon
As if night still endured. But God protects the poor
From haughty clutches: the innocent are immune.
For God is their hope, they fear not sin’s grandeur.

God contents the just man with a good provision
So be not eager to scorn God’s discipline for you.
He smites the unjust deservedly for their derision,

He forgives a humble man and restores him anew.

The Lord strikes but His hands also bring healing-
God redeems all His sons from oppression and fear.
His anointed are unharmed, his enemies are reeling
Famine strikes not His sons nor can sword or spear.

Slander and carnage approach not a righteous man
A just man dismisses famine’s threats or the beast-
For such men the field provides as much as it can
And in security from animals the righteous do feast.

He is confident that all his possessions will flourish
And that thieves never seek out a good man’s tent.
The just know their family will always have nourish
And seeing their children’s children will be content.

God’s favoured fear not either judgement or death
And at the last they welcome the end of their days
We have studied this with all of our wit and breath,
This wisdom is true! Mark it well and do appraise.”

6
Job, in dire misery, replied, voice heavy in emotion:
“Could you weigh my grief and scale my desolation
It would in faith weigh heavier than the vast ocean
Or all the rough, coarse, pervasive sands in collation.

If my speech is rash, the Almighty knows my reason.
His arrows strike me: my blood with poison is rank,
For God has arrayed terrors against me in this season.
Does a horse weep for the river from which it drank?

Do oxen weep for food? Do we eat food without salt?
Find you flavour in the egg white? I touch them not.
I find them unclean, I pray God would see their fault
And provide me with good food without a single blot.

Yet endlessly I pray that God would grant my prayer
That God would bring my misery to its natural end
For if the Lord killed me, I would deem it only fair:
I would not be mourned by wife, children or friend.

Yet I still find some comfort in my unrelenting pain
That I have not sinned against the Lord who is just.
I have small hope of enduring so from sin I refrain.
My spirit will soon fail, as sure as bronze will rust.

Since I cannot help myself, belief fades for my fate.
I should count up on my companions in this plight.
Yet my friends are false as water, oft fake and late,
Loyal as the rivers that rise and fall every fortnight.

Streams quiver in the sun and do rapidly disappear,
Nomads ignore their presence to wander in wastes.
Thus did I of travellers from Tema and Sheba hear,
Hoped to find the springs but regretted their hastes.

They saw joy turn into ash and are all disconsolate.
Are you now become such a disappointment to me?
You see my calamity, behold me wholly desolate,
You assume my fault, that of great sin I am guilty?

Did I ever capitulate to temptations or turn to vice?
Did I ever take a bribe? Or seek wealth or ill gain?
Did I ever need help or cheat a man of a just price?
Tell me of this guilt and I will in a silence remain.

Can any of my friends tell me how I came to fall?
You betray your value to me in your foul speech!
Though all men rebuke me, it proves naught at all.
Are my words believed as you all seek to impeach?

You three would sell a friend to the highest bidder
And you would haggle for an orphan with a buyer.
Would I lie to your face? Let just men reconsider.
I state that I have not sinned, yet you all cry “Liar!”?

Pete Coyle
Pete Coyle grew up in the Community of the Risen Christ in Glasgow, Scotland and obtained a Masters in English Literature and History from the University of Glasgow. Pete and his wife, Amy, are members of Antioch Community in London, UK.