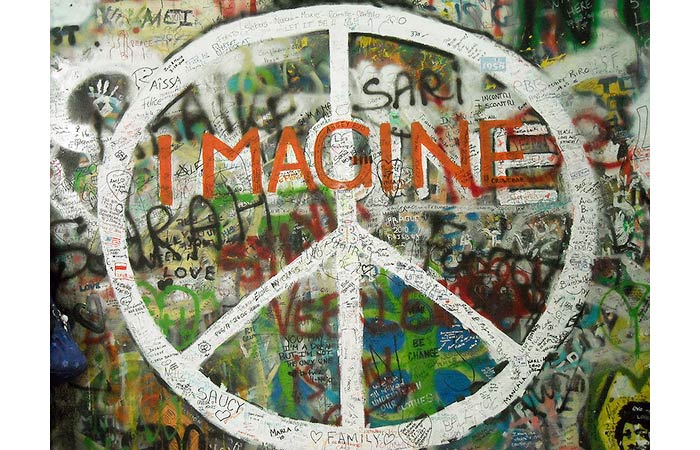 Early one spring morning in 1971, John Lennon sat at a Steinway piano in his bedroom and composed one of the most popular songs of all time. His wife, Ono, watched as he fingered the final chords and crooned the closing lyrics. She said that he imagined it all in nearly one sitting.

Imagine there’s no heaven, it’s easy if you try

No hell below us, above us, only sky

Imagine all the people, livin’ for today

For fifty years, those lyrics have been drummed into my ears thousands of times – from elevators to Olympic games – so many times that I automatically hum “ah, ah, a-a-ah.”

It is completely needless to “imagine” no heaven because it has already been tested. Rome scoffed at heaven, and when the plagues came, the elite (even doctors) fled. Only Christians stayed to care for the dying, at the risk of their lives. Because they were living for tomorrow.

In the 20th Century, it was precisely the governments who imagined no heaven that perpetrated its greatest atrocities: Stalin’s regime killed between 10 and 20 million, Mao’s communist China between 50 and 100 million, and the Khmer Rouge genocides decimated 25% of its population.

Miroslav Volf is a Croatian theologian who lived through the Balkan wars of the 1990’s. He witnessed brutalities we can’t imagine, and some of his family members experienced barbarisms from hell. In his book on lessons learned, Volf explains why he didn’t take up arms against the monsters who executed these brutalities.

If you think that an idea of a judging God leads to violence, NOT AT ALL. Violence thrives today secretly nourished by the belief in a God who refuses to wield the sword.

If, when you are hurt, your children and loved ones are hurt or beaten or raped, when your village is plundered, or destroyed; what will keep you from being sucked into the cycle of violence? Only if you believe that there is a God Himself who knows what people deserve. God will judge, I don’t have to do it.

While the overwhelming majority of 20th Century atrocities were committed by regimes hostile to religion, some were executed by people devoted to religion, like the 9/11 attack on the Twin Towers. But both groups acted from the same motivations: They just can’t let it be.

The atheist regime and the religious terrorist are living for today, not trusting in a God who will ultimately bring real justice, tomorrow.

There’s something enchanting about Lennon’s Imagine. The simple chords, whimsical melody, and sweet lyrics captivate us with imaginary earthly gifts of peace and prosperity. But once we unwrap that present, we find the same Pandora’s Box that Eve opened.

Satan’s message to Eve was: “God is holding you back. Forget Him and life will be all you can imagine.” Lennon let me down with his eerie echo of Satan’s lie: “It’s God and heaven that oppress and kill. Let’s come together and just forget Him.”

Pandora’s box didn’t end suffering and death, it released them. Lennon’s lyrics spit in God’s face, and its snake-oil sweetness poisons us with a desire to do the same. Someone once said,

Hebrews chapter 11 tells us to get back to eternity. It describes heroes who suffer horrible disappointments, torture, and death. It explains the secret that sustained them through the brutality of life here and now: to consider themselves “strangers and exiles on this earth.”

They desire a better country, a heavenly one. Therefore God is not ashamed to be called their God, for he has prepared for them a city.”

Christianity rests on the unseen God and His returning to us a new heaven and new earth. Every other declaration – even when it’s whimsical – is the voice of the world, twisting and shouting its lie that living for a visible today is better than following an invisible God.

But in my life (and yours), the promise of a future heavenly life energizes us to live in the today:

Dear Lord, let it be!

1 thought on “Imagine There’s No Heaven – Livin’ for Today”