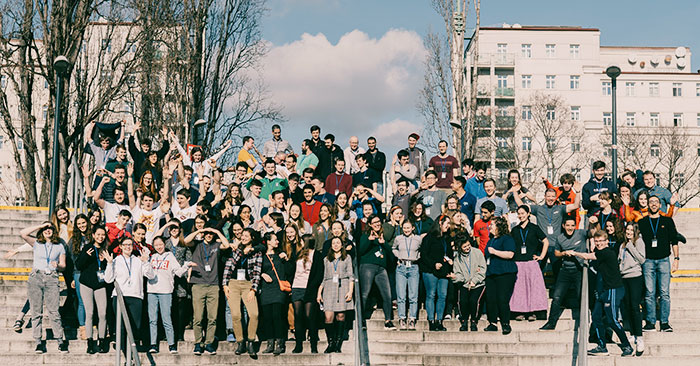 Whenever I remember the Kairos Weekend 2020 in Vienna, Austria my heart is filled with a lot of gratefulness. What an amazingly blessed time it was! This verse from Romans 15:13 was truly fulfilled among us: “May the God of hope fill you with all joy and peace in believing, so that you may abound in hope by the power of the Holy Spirit.” What a privilege it was for me to be the director of that conference!

The theme of HOPE, which had been planned for years, appeared very fitting at the weekend itself. The Lord work powerfully both in the lives of individuals and in the groups they represented. All of a sudden, just a few weeks after the Kairos Weekend, hope is more needed than we even imagined. The Lord knows His own timing. In February, we came together with over 100 young participants from all over Europe, while COVID-19 was still far away. A few weeks later, as we experience severe pandemic disruption of our lives, these students can hold on to the lessons of hope they learnt in Vienna.

“I have gained a new and significantly deeper hope and understanding of what hope is.”, says a participant. “God asked me to hand over fears and doubts and fill the spaces left with hope.”, “God reminded me that He is reliable, that I need to place my hope in Him, because all else fails. I was encouraged that hope results in bold steps and bold steps require hope. God encouraged me and spoke to me about some particular decisions and next steps I should take.”, share others. Many gained new understanding of their calling: “A new zeal for daily prayer and living a life entirely dedicated to God.”, “Share the hope which I have been given.”, and, “I am to be the hope for society.”

The young people who came to Vienna were transformed by the Lord in an environment of worship in the Spirit, relationships with brothers and sisters from other countries, deep personal sharing in small groups, and excellent speakers. Many people expressed that “there was a great sense of peace throughout” and how welcomed they felt.

A major part of my appreciation goes to Stilco for hosting the Kairos Weekend in Vienna. They are a group of young adults – students and young professionals – similar to other Kairos outreaches, who invited us into their city, their desire for community, and their zeal for a radical life with our Lord Jesus Christ. Many of them served in big and small roles.

The location and the relationships of Stilco contributed to a conference that had an overall more ‘continental’ environment. Half of the participants came from the continent of Europe, namely Austria, Poland, Germany, Switzerland, and Belgium. The other half came from the UK, Ireland, Lebanon, Mexico, and the USA. Although most people did not have English as their first language, people felt included. Also, many English speakers were refreshed by the international presence of different cultures, and the several languages expressed in the prayers and worship songs.

Even beyond the individual experiences, the Lord gave us peace and built up his body in unity. Students experienced “a strong unity among the different denominations” with 30% of the participants coming from about 10 different Protestant denominations, and 70% coming from various Catholic backgrounds. Furthermore, we were blessed and honoured by the presence of some participants from the ENC Youth (European Network of Communities) and the Bruderhof community. We experienced how the Lord built bridges and unity among us, with a hopeful expectation for further collaboration.

Some inspiring Christian leaders contributed greatly to the success of the Kairos Weekend. Jean Barbara, president of the Sword of the Spirit, gave the first talk on hope, and lead a workshop together with Johannes Fichtenbauer, president of the ENC, who gave the main talk during our prayer night. Bruce Clewett, a leader in YWAM and the ENC, gave a workshop, and so did the ENC youth delegation. Paul Jordan, director of Kairos Europe, and the Kairos staff team led us in several sessions. The local communities ‘Umkehr zum Herrn’ and ‘Friede Gottes’ supported us spiritually and practically.

That weekend in Vienna was a real encounter with the God of hope, peace, and unity. The Lord set a milestone in his story with us as His people and has equipped us for the challenging times ahead of us. Praise be to Him!

Last month I travelled with UCO Belfast to the beautiful city of Vienna for Kairos Weekend 2020. It was a privilege to spend time in Austria with Kairos – here are just a few quick thoughts on my experience of the weekend.

One thing that really stood out for me over the weekend was the variety of cultures and languages present. This has always been the case at Kairos events, but it was the first time I attended a Kairos event in which people from the British Isles were in a minority. It resulted in a different dynamic, with more non-English worship songs and people praying in numerous languages, but also just many new faces to meet and new stories to hear. It was a powerful reminder of how God is working towards the same goal throughout all the world and through all his peoples.

Another blessing from the weekend was the opportunity for me to pray with people and ask the Holy Spirit to work in different aspects of their lives. Seeing God’s work in such a tangible and powerful way was a reminder of how present God is in all the trials we face in life – this filled me with conviction as I returned back home to Belfast, and I had a renewed confidence that God was going to work in the lives of many different people on campus, particularly those who don’t yet have faith.

I travelled home from Vienna encouraged by how the Lord continues to work across Europe, building small communities of students who are ready to share life together in the hope of strengthening one another as Christians. The Kairos Weekend is a microcosm of all that we do; people bridging across denominational, linguistic and cultural divides to focus on the unity we experience in Christ, so that we can enjoy the amazing gifts presented to us by the Holy Spirit. What a wonderful 48-hour snapshot of the life that the Lord has offered us. Praise God!

Okay. So the theme of the weekend was hope. I really didn’t think that much about it before actually being there. But then when I was there, I realized how perfectly it applies to my whole headache-situation. I’ve had a daily chronic headache for the past 4.5 months now and it’s been really exhausting. Going from doctor to doctor, not being able to attend any sort of social events because of the pain, living my life on a diet of pain killers and dark rooms, etc.

To be honest at times I felt extremely hopeless. But more in a mental way than anything. I mean, it hit me as soon as I arrived at the location in Vienna, my head hurt more than it had in weeks, which was really discouraging. I took a lot of pain killers on Saturday and decided against socializing and for sleep. I didn’t even drink that one sip of wine at the Lord’s day celebration because I was scared of the alcohol provoking everything and making it worse.

Anyways, that’s all context. I entered the weekend without any expectations, because I always forget about it beforehand. Upsi.

Saturday night was the big worship/prayer night. Again, knowing how those things usually go and probably having forgotten all about my previous experiences in that moment, I still didn’t have any expectations.

Worship was great, as always, but then we were invited to go to the back of the room and receive prayer ministry. Two people I already knew pretty well and who I get along with amazingly prayed for me. They asked me if there was anything in particular I wanted prayer for. So I briefly explained my situation to them and told them about how exhausted I was and that I just wanted strength to keep going, no matter what other trials or pain the Lord has in store for me.

Prayers get answered, you know. Sometimes God’s timing might seem weird for us but in that moment, when we started praying, I suddenly felt so comforted. Like I had been falling for a long time and he suddenly caught me. Just like in cheerleading when you fly und suddenly land in a cradle and you know you made it. Anyways, he caught me, and I knew that he won’t let go. I started sobbing obviously because it’s the most amazing feeling ever. One of the girls praying with me also had an image of me being by God’s side. She said that she saw me in his arms just being the way I am, but free. Like nothing else matters. And it’s true, nothing else matters.

When the headaches first started, I knew I wouldn’t just receive healing right away the way I had experienced it before. I knew this was something I had to endure for longer. And I don’t know how much longer this will take, but I’m ready. I’m hopeful. I’ll face whatever is still to come because I know that nothing else matters apart from the fact that God will never let go of me.

Now, about two weeks after the weekend, having gone through tonsillitis and a common cold, I still feel that confident. I know I can trust in God whatever will come.