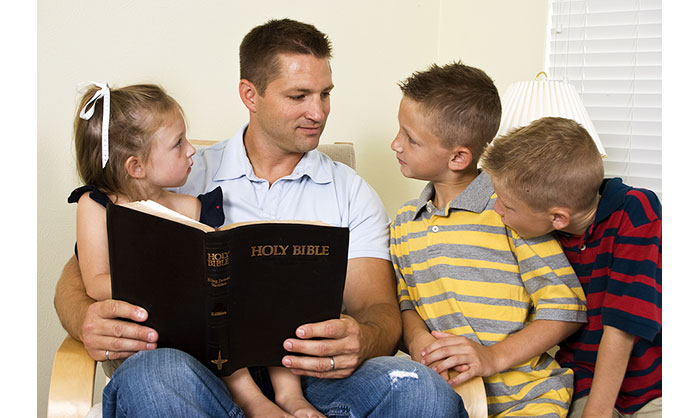 “Son of man, eat what is before you, eat this scroll; then go and speak to the house of Israel”

Nourished with the word of God?

How do we hear the word of God? What motivates us to act upon it, and what do we use to hide from it?

There was, and still remains, a time honoured tradition in my parents’ household in Dublin. Around about 8.30 every evening my father will rise from his paper, or from the homework he is going through with one of his children, or the film he is pretending to watch with his wife. He will leave for the sitting room to collect his bible, his commentary, and the daily Catholic missal. As he does so there is a scrum as his offspring try desperately to reach the downstairs bathroom. There is an unwritten rule that family prayers can be dodged by being “otherwise engaged” by the time the bible hits the table in the back room of our house.

For 24 years I have sat through times of enlightenment, prayer and sometimes what was just pure messing around with my siblings at the long Oak table as we made faces, laughed and learned through Dad’s efforts to teach us about the word of God. The greatest thing I remember (and still experience when I’m home) was the uncontrollable urge to laugh when you would catch someone’s eye. As Dad expounded the word, fired questions and sought insights from his recalcitrant children, half of them would be trying desperately not to laugh at the funny passages in the bible or whatever happened to be the cause of merriment that day.

On one memorable occasion the reading was from the Book of the Prophet Ezekiel, chapters 2 and 3.

“But you, son of man, listen to what I say to you. Do not rebel like that rebellious house; open your mouth and eat what I give you.” Then I looked, and I saw a hand stretched out to me. In it was a scroll, which he unrolled before me. On both sides of it were written words of lament and mourning and woe.”

Valiantly my father tried to keep order and explain the significance of the passage, as one by one, his kids succumbed to the giggles at the picture of a single hand from heaven, trying to simultaneously hold and unroll a scroll without any assistance.

When we heard that the prophet subsequently ate the scroll, the entire table dissolved in mirth. Whoever made it to the bathroom first that evening had missed out. These were times of great joy and fun in our family as well as times of prayer. My father’s love of Scripture was palpable. His face would light up and he would become animated in a different way to the other things he loved in life. He did a good job teaching us how to read and understand the Bible. So often, however, the language of the Scripture would blind me to what was actually being said, what the real import of the message was my dad was explaining. I would end up wondering what kind of bread Jesus turned the stones into in the desert, or what weapon Moses used to kill the Egyptian, rather than seek to understand what lay behind the facts. I think I didn’t listen too well. I could remember that Ezekiel ate the scroll, but I couldn’t remember what the message on it was.

To hear and believe

A recent prophecy in Sword of the Spirit has made me think quite a bit. “I tell you, you are unprepared for the number of young people I will send to you. I will make your eyes water and your ears tingle.” As I have grappled with my skepticism and looked objectively at the demographics of our communities in the Sword of the Spirit, I have struggled to see how this word could be fulfilled.

Recently, young people in our communities in Europe and the Middle East have spoken about a new stirring in their hopes and dreams for the Sword of the Spirit. They talked about a new vision for being dynamic and radical in evangelism. They observed among their peers in the Sword of the Spirit new courage to reach out and new enthusiasm for growing in radical discipleship, and they called on us to re-examine the way we think and act as we reach out. As I listened, I thought about the generations before having similar words and enthusiasms, dreams and visions, holding similar conferences and retreats, seeking similar “radical” steps. Were their dreams also fulfilled, I wondered? Is this a bunch of kids warbling about their feelings or is this God speaking to me? What is he trying to say?

To hear and obey the word of the Lord is not an easy task. The stories of the prophets in the Bible are filled with harsh situations and unenviable choices, when God places his hand upon them. Elijah “came to a broom tree, sat down under it and prayed that he might die. ‘I have had enough, Lord,’ he said” (1 Kings 19).

Jonah ran from the Lord, was shipwrecked and swallowed by a whale before he could stomach the message the Lord wanted him to deliver.

Ezekiel writes that he was taken by God and “went in bitterness and in the anger of my spirit, with the strong hand of the Lord upon me. I came to the exiles who lived at Tel Abib near the Kebar River. And there, where they were living, I sat among them for seven days – overwhelmed” (Ezekiel 3: 14-15).

When the word of the Lord is bad news it can be difficult to deliver and hard to hear. When it is good news it is perhaps easier to hear, but there is still a response to be made. What is easy to do is to examine the context, the language, the syntax but drown the message itself in laughter, analysis or whatever the defence of choice may be. God’s word does not come for no purpose: it necessitates a response. This is the challenge to the “young generation.” What will I do to respond? What will I change? If I have eaten the word, what does it motivate me to do?

I believe the Lord is speaking to us in Europe and the Middle East, as well as to the wider Sword of the Spirit throughout the world. I believe my peers are correct – we must be more radical. We need to change our courses and be more “different.” – A movement needs dynamism or it will die. God is calling us to be more open and to seek to win others to his kingdom. He wants us to share the rich life we have been given in Sword of the Spirit. – How could we not? – But in some ways I think we need to stay the same. There is a danger in swinging wildly to that which seems different and radical today and leaving yesterday’s big idea half finished.

To make a statement, I think God is calling us to Nike community. Have those visions, dream dreams and wait upon his word, but when we catch it, “Just do it” as the Nike motto says. Talking, planning and seeking legitimacy is a defence mechanism too. Find that radical step and take it in your own life first – if it’s the right one God will bless it, bring fruit and people will be queuing up around the corner to hear your thoughts. What daily areas in my life are not radical? When do I meet God and for how long? What do I do well? – Could I ask the same questions about my participation in community? Those would be radical steps as well.

To hear and obey

To hear and obey is not an easy concept. I find hearing and “believing” difficult enough without having to “digest” and “enact” the word of God as well. He will bring it about though – there will be an influx of young people and they will come in Europe and the Middle East as well. He’s said it, so he’s gonna do it. Will we be a part of it though? Will I believe enough to act on it? Will you take a break at 60 to look back and see your dream a reality? – Or will you be chasing the next one? I invited a guy to our spring weekend retreat, will he come? Most of it is in the Lord’s hands of course. – But I think he may want me to do a few things too. Believing could be a start.

This article was first published in the February 2008 Issue of Living Bulwark, © Sword of the Spirit.

Top image: Photo of a father reading the Bible to his children, from Bigstock.com, (c) by kk5hy, Stock photo ID: 5513170

Tadhg Lynch is a member of the Servants of the Word, a missionary brotherhood of men living single for the Lord, and a Mission Director for Kairos in Europe and the Middle-East, an international outreach to young people. Tadhg is originally from Nazareth Community, Dublin, Ireland.

2 thoughts on “Digesting God’s Word Together in Family, Outreach, and Community”