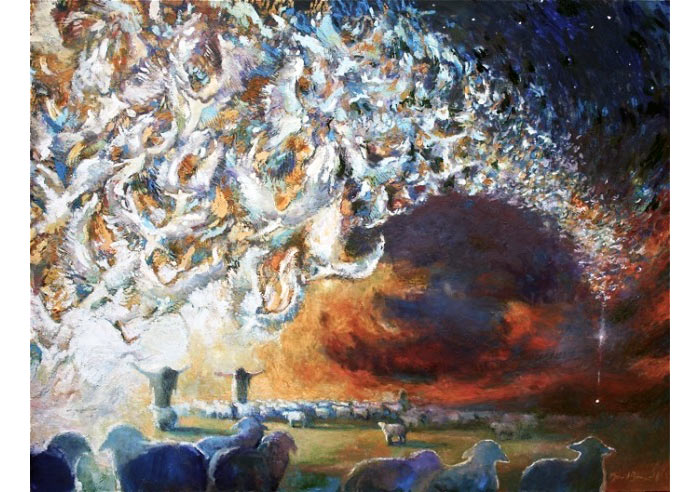 God’s world – the universe that came forth good and splendid from the hand of the Creator – is in the grip of dark powers. Isaiah the prophet tells us that we live in “a land of gloom” and that we are “burdened by the yoke of a taskmaster” (Isaiah 9:2, 4). We know all too well the texture of that gloom and the weight of that yoke: guns in the hands of teenagers, the hungry and homeless who roam the streets of affluent cities, families riven by the stubborn inability to forgive, depressions and anxieties that haunt us like ghosts, ambitions that succeed only in breaking hearts and wrecking lives, the million acts of violence against bodies and souls, nations baring their teeth and rattling their swords. And as we gaze back on the bloody [20th] century … we see all too much of the darkness of which the prophet speaks: Auschwitz, Hiroshima, Rwanda, Vietnam, Flanders Field, Normandy Beach, Columbine, and the killing fields of Cambodia.

Yes, God’s world is good, but we seem to live, as C. S. Lewis put it, in enemy-occupied territory, a place where the “powers” in myriad forms hold sway. And all of our attempts to ameliorate the situation – economic reforms, political rearrangements, psychological adjustments – just seem to make matters worse. And so the believer sings his mournful song from the loneliness of his prison: “O come, O come Emmanuel and ransom captive Israel.”

The good news of Christmas is that the rightful King has returned to reclaim what is his and to let the prisoners go free. The God announced by all the prophets and patriarchs – by Abraham, Jeremiah, Ezekiel, Amos, and Isaiah – is a God of justice, and this means that he burns to set things right. God hates the sin and violence and injustice that have rendered gloomy his beautiful world, and therefore he comes into that world as a warrior, ready to fight. But he arrives (and here is the delicious irony of Christmas) stealthily, clandestinely, sneaking, as it were, unnoticed behind enemy lines. The King comes as a helpless infant, born of insignificant parents in a small town of a distant outpost of the Roman Empire; and there wasn’t even room for him in a common inn.

Stealthily he comes, but powerfully and dangerously. Caesar and Quirinius – potentates who think they are controlling the world with their census – are actually working according to God’s plan, paving the way for the King who will dethrone them. When Herod hears of his arrival, he trembles, as well he might, for he knows in his bones that his days are numbered. The sad Jerusalem that he rules through fear and violence is meant to be a holy city, governed according to God’s designs, and the new Ruler has just arrived. Herod senses what the shepherds see directly: “and suddenly there appeared with the angel a multitude of the heavenly host” (Luke 2:13). Let us not be naive or sentimental about the angels: A “host” is an army, and this is the army of the infant warrior come to root out the power of the enemy.

There is, of course, another reason for the simplicity and poverty of his arrival: He is to be a soldier, but he will not fight with the violent weapons of the Herods, Caesars, and other kings of this dysfunctional world. Rather, he will wield the sword of nonviolence and the spear of forgiveness; and he will wear the helmet of righteousness and the breastplate of compassion. He will conquer through the finally irresistible power of love, the same power with which he made the universe.

In the ancient mythological accounts of creation, God or the gods make the world through a primordial act of violence; they conquer, control, divide, order through force. But the true God makes the universe, not by wrestling an opposing power into submission, not by dominating and destroying a rival, but rather through a sheerly generous and nonviolent act of love.

In the language of the philosophers, God creates ex nihilo, from nothing. And so when the Son of God enters his disordered world in order to recreate it, he acts with a similar gentleness and nonviolence. Pharoah, Caesar, Quirinius, Herod – and their like down through the ages to the present day – seek to throw off all constraints, but the Son of God, the creator of the stars and planets, allows himself to be wrapped in swaddling clothes, to be tied up, bound, beholden to the other.

The rulers of this world endeavor at all costs to have their own needs met, but the Ruler of the age to come is placed in a manger, for he is to be food for the hungry. The powers seek control, but the Power allows himself to become, in Chesterton’s words, “a child too weak to raise his own head.”

In all of this, of course, he anticipates the drama of the cross. Over the crucified, Pilate will place a placard announcing “Jesus of Nazareth, King of the Jews,” but Caesar’s representative will have no idea of the irony of this statement. Roman authority was expressed and maintained through the violent overthrow of opposing powers, through the crucifixion – real and symbolic – of rival kings.

Augustine summed up the Roman way with devastating laconicism: libido dominandi, the lust to dominate. But the true King, the ruler of cosmos, breaks that power precisely by meeting it with forgiveness, nonviolence, and compassion: Nailed to the cross, powerless, he says, “Forgive them Father, they know not what they do.” And in those words, the Roman way (the way of the world) is undone.

Every playground bully and every canny politician knows that the libido dominandi is always stirred to greater ardor when it is opposed by a similar force: an eye for an eye, making the whole world blind, as Gandhi said. When it is met by harsh and dreadful love, a love willing to give itself utterly away, it dries up.

“For the yoke that burdened them, the pole on their shoulder, the rod of their taskmaster you have smashed as on the day of Midian; For every boot that tramped in battle, every cloak rolled in blood, will be burned as fuel for flames”.

The yoke, the rod, the boot trampled, the cloak rolled in blood – all the dark works of a fallen world – will be thrown by this newborn king into the fire. Indeed, when he bursts on the public scene, he will make plain his purpose, “I have come, not for peace, but for the sword” and “I have come to light a fire on the earth.”

Precisely because he carries a sword of compassion and illumines the flame of love, Jesus is the first truly dangerous warrior, the first enemy the powers have really feared.

So for us the followers of this soldier, Christmas is not a sentimental feast, not a harmless festival of cards and gifts and twinkling lights; it is a call to arms, a summons to start a blaze.

We are in prison, but the liberator is here; we are in the gloom, but the torchbearer has presented himself; we are pinned down by the enemy, but the Warrior has come. And therefore we can sing our triumphant song:

“Comes a Warrior: A Christmas Meditation” by Robert Barron, was originally published in
The Sign of Peace: The Journal of the Catholic Peace Fellowship Vol. 2.1, Christmas 2002, copyright by Catholic Peace Fellowship. It was republished by Sheed and Ward in 2004 as an essay in the book, Bridging the great divide: musings of a post-liberal, post-conservative evangelical catholic. copyright 2004 by Rowman & Littlefield Publishers, Inc., Oxford, UK and Lanham, Maryland.

Robert Barron is an auxiliary bishop of the Catholic Archdiocese of Los Angeles, California, USA. He is a noted author, speaker, and theologian, and founder of the global media ministry Word on Fire.