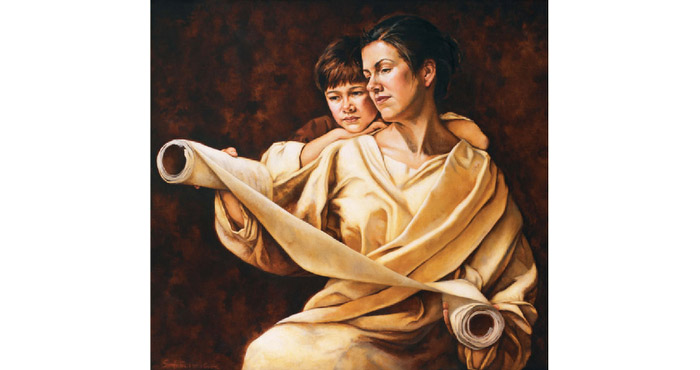 There is a grandmother in the New Testament, Lois, who easily could have taken the “give-up approach” with her grandson, Timothy (2 Timothy 1:5). She could have said, “The Romans run the world. They are pagans. Caesar is a tyrant, a terrible ruler. Our children are being deluded. The faith of our fathers is being lost. They don’t keep the feasts. Moses is getting rebranded. No one knows the Ten Commandments anymore, and our priests are all self-centered, two-faced, and sanctimonious. Why bother anyway?”  She could have totally given up. She had at least as many reasons as we do.  However, she didn’t give up… and neither should we.

Who was this woman? We don’t know a lot about her, but we can make some pretty good guesses.

Her grandson, Timothy, was the recipient of two of the New Testament letters from the Apostle Paul, his mentor and father in the faith. The second letter, where Lois is mentioned by name, was probably written shortly before Paul was put to death in the mid-sixties. Timothy was a young leader at that time who was discipled in the faith by his grandmother, Lois, and his mother, Eunice. This would indicate that Lois was among the first generation of disciples, probably a little older than Paul.

Lois is a perfect example for today’s grandparents to emulate.The times we live in may be stressful, bleak, discouraging, and even frightening.  Despite our circumstances, we are tasked with accomplishing a mission just as Lois was.  She was called to pass on her faith without getting distracted by the difficulties happening in the world around her. She kept her focus on her purpose and did the right thing. That is exactly what we need to do!

Michael Shaughnessy is the founder of Grandly. His most recent book, The Strategic Grandparent, is available at The Word Among Us and Amazon.

About Grandly: The Strategic Grandparents Club

Our website reaches a network of grandparents who are interested in learning how to think, pray, and act strategically. We publish bi-weekly online articles that provide encouragement, motivation, and practical tools on how to pass on their faith to grandchildren. Through our “Do It Grandly” seminars, we help grandparents to grow in their relational skills while providing insight into contemporary youth culture, giving them valuable tools for building impactful, Christ-centered relationships with their grandchildren. These seminars provide a way for Sword of the Spirit grandparents to re-enter internal (their own grandchildren) and external (their own peers) mission

Interested in hosting a seminar in your local community or learning more? Please email Pili Galvan Abouchaar at grandlydirector@gmail.com.

Mike Shaughnessy is a lifelong member of the Servants of the Word, an international ecumenical brotherhood of men living single for the Lord. He is a prolific writer. He has written extensively about youth work and currently leads Grandly, a ministry helping grandparents pass on their faith to their grandchildren. He lives in Lansing, Michigan USA.