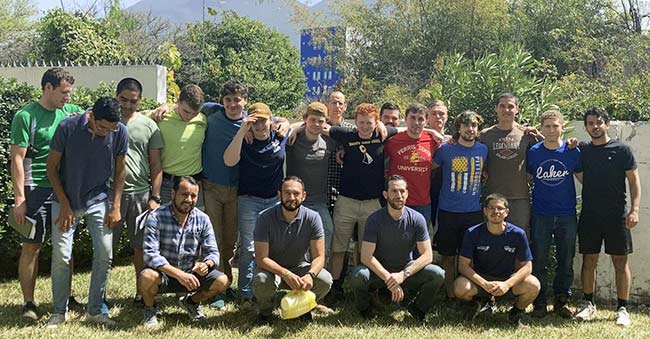 Introduction: Our Kairos outreach and mission in Sword of the Sprit exists to spread the Gospel and to help young people grow in discipleship. A key charism our Kairos network shares in common across different countries and groups is the desire to spread the Gospel. We help students and young people to reach out to others with the Gospel and to bring the life of Christ to others. A key part of our work of discipleship takes place in that process: we see our students and young people transformed through sharing the greatest gift they have received – through telling others of the life-changing power of the Gospel.

An Interview with Angel Santiago

I hear you took some people on a Mission trip – please tell us more.

Nine students came from University Christian Outreach chapters in Lansing, Ann Arbor, and Pittsburgh, USA. They joined the team of four Servants of the Word lifelong brothers from Michigan and two brothers in the international formation house in Ann Arbor.

We flew together into McAllen close to the Mexican border where a couple of Servant of the Word brothers from Monterrey picked us up and took us across the border into Monterrey. There we joined with some members of University Christian Outreach and Servants of the Word in Monterrey.

What was the vision and goal behind this trip?

Our vision and goals included the following: To do some humanitarian service with people in need, especially among the poor in Mexico. To help the university students on our team grow in their relationship with the Lord and to encourage them to take further steps in living as disciples for Christ. We also wanted to give them some connection with Sword of the Spirit communities in another country and culture. For this trip we chose to visit Jesed Community in Monterrey. We also wanted to present consecrated life as a real option for consideration among young men involved in our outreach mission. And we wanted to give the men an opportunity to serve in an ecumenical environment involving mission with Protestants and Catholics.

Since we had to cancel events in the last two years because of COVID, we wanted to organize an event aimed at encouraging students to make radical decisions for the Lord. Part of that was for them to get out of their comfort zone by doing practical humanitarian service in an environment with the poor.

So what did you do concretely during those 7 days?

Our team had the opportunity to spend some time with students in the university outreach in Monterrey. We had a men’s night with a time for worship, sharing, and building friendships. On another evening we had a “discipleship night” which included some discussion about living single for the Lord.

We spent a few days giving some practical service for a priest who runs a food bank for the poor. He needed help cleaning up the property and painting the place. For another few days, we helped a Protestant pastor of a New Life Church with practical needs, such as fixing his roof, cutting down trees, moving walls, and pouring a concrete floor. We also gave out food to poor people. And we organized a program for children and their moms, since none of them were able to go to school and the children had nothing else to do.

Was it not a challenge for an American group to interact in a Spanish-speaking environment?

Our whole group was comprised of twenty-five men between those who went there and the brothers from Monterrey who joined us. We had enough Mexicans who spoke English well. They served as translators for us. Being in an environment where people do not speak your mother tongue is a challenge – but it worked for us since we had some who were bilingual.

Did you have opportunity to share how the whole trip went and what people experienced there?

In our closing time together, we received a lot of positive feedback. Many of the students were encouraged, and our Servants of the Word brothers in formation were blessed. At the same time, it was a great opportunity for the lifelong brothers from different household locations to serve together. So looking back, I can say that all the objectives for the trip were accomplished.

Going somewhere else gives you a broader vision of the Sword of the Spirit as an international and an ecumenical community of communities. For some of the Mexican brothers it was their first opportunity to work with Protestant brothers, and many of the Americans on the trip had never been outside of their own local part of the US.

This article is adapted from the Servants of the Word news blog.