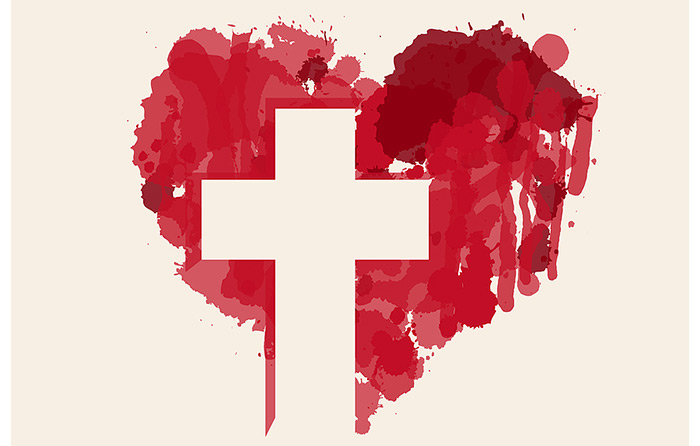 I love you, Lord, not doubtingly, but with absolute certainty. Your Word beat upon my heart until I fell in love with you, and now the universe and everything in it tells me to love you, and tells the same thing to us all, so that we are without excuse.

What do I love…

And what do I love when I love you? Not physical beauty, or the grandeur of our existence in time, or the radiance of light that pleases the eye, or the sweet melody of old familiar songs, or the fragrance of flowers and ointments and spices, or the taste of manna or honey, or the arms we like to use to clasp each other. None of these do I love when I love my God. Yet there is a kind of light, and a kind of melody, and a kind of fragrance, and a kind of food, and a kind of embracing, when I love my God. They are the kind of light and sound and odor and food and love that affect the senses of the inner man. There is another dimension of life in which my soul reflects a light that space itself cannot contain. It hears melodies that never fade with time. It inhales lovely scents that are not blown away by the wind. It eats without diminishing or consuming the supply. It never gets separated from the embrace of God and never gets tired of it. That is what I love when I love my God.

What is my God?

And what is my God? I asked the earth and it replied, “I am not he”; and everything in it said the same thing. I asked the sea … I asked the heavens, the sun, the moon and stars. They said to me, “Neither are we the God you seek.”  I said to all the sensory objects that cluster around my body and cause it to react, “You speak of God and say you are not he. Then tell me something about him.” And they all cried out with a loud voice, “He made us!” I questioned them by fixing my attention on them, and their beauty was their answer.

We are not God – He made us

Who are you? Then I turned to myself and said, “Who are you?” And I replied, “A man.” But in me are present both body and soul, one exterior, the other interior. Which should I impress to help me find my God? With my physical apparatus I had already searched for him from earth to sky, as far as the eye could see. But the interior equipment is better. The messengers of my body delivered to it the answer of heaven and earth and everything in them when they told me, “We are not God,” and “He made us.”  The inner man knows these things by means of the ministering of the outer man. The inner “I” knows them; I, the soul, know them through the senses of the body. So I asked the whole frame of the universe about God and it answered back, “I am not he, but he made me.”

The truth is, there is one mediator whom you in your hidden mercy have revealed to the meek and lowly, and have sent as an example of humility to be followed. That is the mediator between God and man, the Man Christ Jesus, who has appeared between mortal sinners and the immortal Just One. As men are, he was mortal; as God is, he was just. And because righteousness issues in life and peace, he, through his righteousness with God, nullified the death of justified sinners by sharing their lot with them….

Your Word dwells in our midst

How much you loved us, Good Father, who spared not your own Son but gave him up for us sinners! How much you loved us, since it was on our behalf that he, who thought it no robbery to be equal with you, submitted himself to the death of the cross. He alone was free among the dead because he was free to lay down his life to take it again. For us he was both victor and victim, or should I say, victor because victim…. By being born your Son, and then becoming a slave to serve us, he made us to become your sons. So I have good reason for my strong hope in him who sits at your right hand and makes intercession for us. If I didn’t have that hope I would be desperate. But I believe that in him you heal all my weaknesses, and they are many and great … but your medicine is even greater. It would be easy to think that your Word is too remote for any communication with man. It would be easy to despair, had not the Word become flesh to dwell in our midst.

Aurelius Augustine was born in 345 in the town of Tagaste, in Roman North Africa, in what is today Algeria. His mother was Monica, a very devout Christian who had a significant influence on her son’s life. His father, named Patricius, was a pagan of significant status in society. Patricius became a Christian shortly before his death.

Augustine was educated at Carthage where he enjoyed academic success. He also enjoyed the party life, and at the age of 17 fell in love with a woman whom he never named. They lived together unmarried for 13 years and had a son whom Augustine named Adeodatus, meaning “gift from God.” His son died in his youth.

At the age of 19, after reading Cicero’s Hortensiusat, Augustine fell in love with philosophy. He later wrote, “It gave me different values and priorities. Suddenly every vain hope became empty to me, and I longed for the immortality of wisdom with an incredible ardour in my heart.” While he pursued Platonic philosophy and the theology of the Manichaens, a Christian heretical sect, he became restless for truth and virtue. Shortly before his 30th birthday, Augustine encountered Ambrose, the saintly bishop of Milan. Augustine was moved by Ambrose’s example and his inspired teaching and preaching of the gospel. At the age of 32 Augustine found peace with God and was baptized by Ambrose during the Easter liturgy in 387. Augustine returned to North Africa and formed a monastic community with a group of friends. He was ordained a priest in 391 and became a noted preacher. In 396 he reluctantly became a bishop and remained the bishop of Hippo until his death in 430. He left his monastic community, but continued to lead a monastic life with the parish priests of Hippo in his episcopal residence. Augustine died on August 28, 430, during the siege of Hippo by the Vandals.

Augustine was a prolific writer and original thinker. His numerous writings, including theological treatises, sermons, scripture commentaries, and philosophical dialogues, number into the hundreds. His autobiography, the Confessions, was considerded the first Western autobiography. It was highly read among his contemporaries and has continued as a classic throughout the ages.

Augustine is one of the most important figures in the development of Western Christianity. He is esteemed as a great Latin church father and a Doctor of the Roman Catholic Church. Many Protestants consider him to be one of the theological fathers of Reformation teaching. Among Orthodox he is called St. Augustine the Blessed.