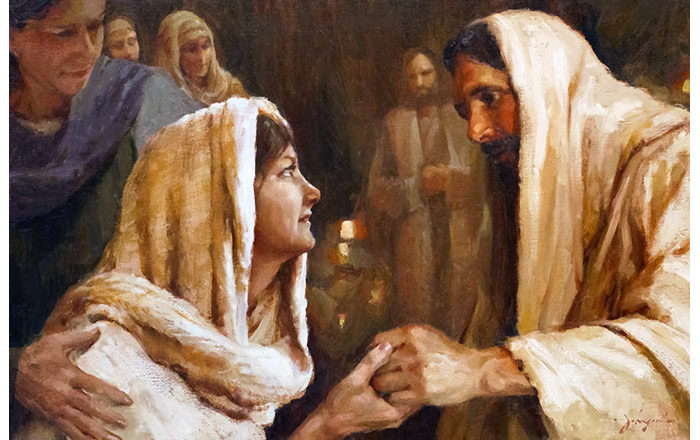 Search me through and through, O Lord.
Explore my sin-bruised being
and bind up my injuries
(whether gained through fault or folly).

As I surrender to your skilled hands and healing touch,
your fingers strip away my protections and self-illusions,
probing the wounds of my heart,
the raw sores of my soul,
my aching disappointments and mutilated hopes.
And then with patient care and Spirit’s balm,
you nurse me back to sound wholeness in you,
restoring my vitality
and giving new exercise to my so-long-crippled love.

The Good News of the Kingdom

Jesus went about all Galilee, teaching in their synagogues and preaching the gospel of the kingdom and healing every disease and every infirmity among the people.

Jesus alerts anyone who would listen to the fact that the victorious presence of God is at hand and that the death throes of creation and of history are about to come to an end.

Erasmo Leiva-Merikakis, Fire of Mercy,
Heart of the Word

After his baptism, Jesus went to Capernaum, a fishing village on the northwest shore of Lake Gennesaret. From this home base, he taught and preached throughout Galilee. (Matthew 4:13; Mark 2:1). Capernaum was located in the area settled by the tribes of Naphtali and Zebulun in the northern kingdom. This territory had been invaded and occupied by Assyria in 734 B.C. and was flooded with Gentiles, while many of the Jewish population had been deported. When Jesus took up his ministry there, Isaiah’s prophecy foretelling the exiles’ deliverance was fulfilled:

The land of Zebulun and the land of
Naphtali,
toward the sea, across the Jordan,
Galilee of the Gentiles—
the people who sat in darkness
have seen a great light,
and for those who sat in the region
and shadow of death
light has dawned.

Thus, this region, so despoiled in Isaiah’s time, was the first to see the light of Christ dawning on it. “When Christ appeared in those lands . . . something began on earth like when a stone is cast into a quiet lake and starts ripples that finally reach the farthest shores,” wrote Archbishop Oscar Romero. “Christ appeared in Zebulun and Naphtali with the signs of liberation: shaking off oppressive yokes, bringing joy to hearts, sowing hope. And this is what God is doing now in history” (The Violence of Love).

Jesus’ first message echoed that of John the Baptist, “Repent, for the kingdom of heaven is at hand” (Matthew 4:17), and provided the bridge between the ministries of John the Baptist and Jesus. Commenting on Matthew’s gospel, theologian Erasmo Leiva-Merikakis said Jesus choose those first words “to show his debt of gratitude to the Baptist and his strict continuity with him.” However, “now the word of preparation becomes the word of fulfillment.” As the herald faithfully completed his task, the Messiah began his own – and God’s promises were thus being fully realized.

Both John and Jesus challenged their hearers to repentance and conversion of heart in order to receive the kingdom of God – that is, God’s reign on earth, a reign exercised in the lives of men and women. However, whereas John’s work had been to proclaim what was to happen in the future and prepare the way for it, Jesus announced a kingdom that had arrived in its fullness and was present among his hearers. Jesus proclaimed “good news,” thus personifying in himself Isaiah’s prophecy,

In his preaching and teaching – through sermons, exhortations, and parables – Jesus unfolded the values of God’s kingdom and the principles of “kingdom living” – a kingdom often at odds with worldly values. It is a kingdom of priceless worth: “The kingdom of heaven is like treasure hidden in a field . . .” (Matthew 13:44). It starts out small but grows into something much bigger: “To what shall I compare the kingdom of God? It is like leaven . . .” (Luke 13:20-21). It requires great humility: “Unless you turn and become like children, you will never enter the kingdom of heaven” (Matthew 18:3). The kingdom that Jesus proclaimed was a kingdom where God reigned.

Matthew tells us that Jesus “went about all Galilee, teaching in their synagogues and preaching the gospel of the kingdom and healing every disease and every infirmity among the people. So his fame spread throughout all Syria, and they brought him all the sick, those afflicted with various diseases and pains, demoniacs, epileptics, and paralytics, and he healed them” (Matthew 4:23-24). This is a clear and concise summary of the works of the Messiah, which mirrored the messianic signs that had also been foretold by Isaiah:

Then the eyes of the blind shall be
opened,
and the ears of the deaf unstopped;
then shall the lame man leap like a
hart,
and the tongue of the dumb sing
for joy.

Indeed, these signs described by Isaiah were the answer that Jesus gave to the disciples of John the Baptist in reply to their inquiry, “Are you he who is to come, or shall we look for another?” (Matthew 11:2-5). The miracles and healings that Christ performed both affirmed and demonstrated that he had a God-given mission to bring salvation and the good news of God’s kingdom to all who would believe.

Luke’s account of Jesus’ visit to his hometown of Nazareth further emphasizes the prophetic fulfillment of God’s promises embodied in Jesus – the Christ, the anointed one. When Jesus came to the synagogue as was his custom, “there was given to him the book of the prophet Isaiah” (Luke 4:17). Finding these prophetic words, he read to his fellow townspeople:

“The Spirit of the Lord is upon me,
because he has anointed me to preach
good news to the poor.
He has sent me to proclaim release to
the captives
and recovering of sight to the blind,
to set at liberty those who are
oppressed,
to proclaim the acceptable year of
the Lord.”

Anointed by the Spirit at his baptism, Jesus took up the mission entrusted to him by the Father and now identified himself as the one foretold in Isaiah’s prophecy, declaring, “Today this scripture has been fulfilled in your hearing” (Luke 4:21). This declaration was “followed by the actions and words known through the Gospel. By these actions and words Christ makes the Father present among men. . . . [T]he Messiah becomes a particularly clear sign of God who is love, a sign of the Father” (Pope John Paul II, Rich in Mercy).

The good news that Jesus proclaimed and the kingdom that he ushered in confounded the expectations of most of his hearers. The glory of King David and his descendants had been dimmed by their failures, sins, and defeats at the hands of their enemies. Israel longed for an heir to David’s dynasty – an ideal ruler, a messianic figure – whom God would raise up to establish justice, build an empire, bring peace, and restore the throne of David. By Jesus’ time, the messiah many Jews hoped for was a political leader who would free their nation from the domination of Rome.

Jesus’ behavior and actions contradicted this understanding of a messianic ruler and transcended nationalistic conceptions of his role. Yet he seemed ambivalent about verbally declaring or clarifying his identity as the Messiah. On the one hand, Jesus did not deny that he was God’s agent, sent by God to establish the new order that he was so openly proclaiming. When the woman at the well in Samaria said, “I know that Messiah is coming (he who is called Christ); when he comes, he will show us all things,” Jesus replied, “I who speak to you am he” (John 4:25-26). And he accepted Peter’s and Martha’s professions of faith in him as “the Christ, the Son of the God” (Matthew 16:16; John 11:27). On the other hand, however, Jesus did not want to people to think of him as a political figure who would conquer Israel’s enemies and establish a new Davidic kingdom on earth, a role he refused and rejected. So when his identity was being questioned, Jesus’ responses were generally oblique:  “You have said so” (Matthew 26:64; 27:11); “Why do you ask me?” (John 18:21) “If I tell you, you will not believe; and if I ask you, you will not answer” (Luke 22:66).

The Messiah – the Son of God, the Word-made-flesh – was sent into the world by the Father to redeem humankind from sin, liberate us from slavery to sin and death, and restore us to full union with God. Each of us must search our hearts to fully recognize our own need for a Messiah so that we can receive the salvation he offers us.

This reflection by Jeanne Kun is excerpted from God’s Promises Fulfilled, The Word Among Us Press, Copyright © 2006. All rights reserved. Used with permission.

Jeanne Kun is a noted author, and a member of Bethany Association, an international, ecumenical association of women living single for the Lord in various communities of The Sword of the Spirit, and a senior woman leader in the Word of Life Community, Ann Arbor, Michigan, USA.