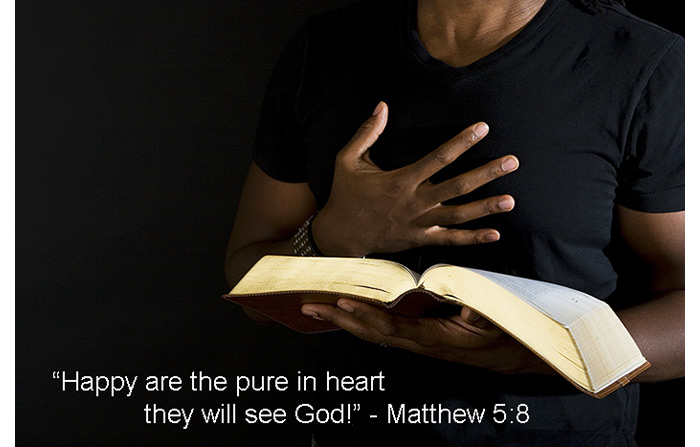 Alas, but this has indeed not come to pass. Something has come in between. The separation of sin lies in between. Each day, and day after day something is being placed in between: delay, blockage, interruption, delusion, corruption. So in this time of repentance may you give the courage once again to will one thing. True, it is an interruption of our ordinary tasks; we do lay down our work as though it were a day of rest, when the penitent (and it is only in a time of repentance that the heavy-laden worker may be quiet in the confession of sin) is alone before you in self-accusation.

This is indeed an interruption. But it is an interruption that searches back into its very beginnings that it might bind up anew that which sin has separated, that in its grief it might atone for lost time, that in its anxiety it might bring to completion that which lies before it. O you who give both the beginning and the completion, give victory in the day of need so that what neither a person’s burning wish nor their determined resolution may attain to, may be granted in the sorrowing of repentance: to will only one thing.

…So let us, then, speak about this sentence: “Purity of heart is to will one thing” as we base our meditation on the Apostle James’ words in his Epistle, Chapter 4, verse 8:

“Draw near to God and he will draw near to you. Cleanse your hands, you sinners; and purify your hearts you double-minded.”

For only the pure in heart can see God, and therefore, draw near to him; and only by God’s drawing near to them can they maintain this purity. And he who in truth wills only one thing can will only the Good, and he who only wills one thing when he wills the Good can only will the Good in truth.

I. IF IT WILL BE POSSIBLE, THAT A MAN CAN WILL ONLY ONE THING, THEN HE MUST WILL THE GOOD.

To will only one thing:but will this not inevitably become a long-drawn-out talk? If one should consider this matter properly must he not first consider, one by one, each goal in life that a man could conceivably set up for himself, mentioning separately all of the many things that a man might will? and not only this; since each of these considerations readily becomes too abstract in character, is he not obliged as the next step to attempt to will, one after the other, each of these goals in order to find out what is the single thing he is to will, if it is a matter of willing only one thing? Yes, if someone should begin in this fashion, then he would never come to an end. Or more accurately, how could he ever arrive at the end since at the outset he took the wrong way and then continued to go on further and further along this false way?

It is only by a painful route that this way leads to the Good, namely, when the wanderer turns around and goes back. For as the Good is only a single thing, so all ways lead to the Good, even the false ones: when the repentant one follows the same way back. O you the unfathomable trust-worthiness of the Good! Wherever a man may be in the world, whichever road he travels, when he wills one thing, he is on a road that leads him to you! Here such a far-flung enumeration would only work harm. Instead of wasting many moments on naming the vast multitude of goals or squandering life’s costly years in personal experiments upon them, can the talk do as life ought to do – with a commendable brevity stick to the point?

In a certain sense nothing can be spoken of so briefly as the Good, when it is well described. For the Good without condition and without qualification, without preface and without compromise is, absolutely the only thing that a man may and should will, and is only one thing. O blessed brevity, o blessed simplicity, that seizes swiftly what cleverness tired out in the service of vanity, may grasp but slowly! That which a simple soul, in the happy impulse of a pious heart, feels no need of understanding in an elaborate way, since he simply seizes the Good immediately, is grasped by the clever one only at the cost of much time and much grief. The way this one thing is willed, he wills is not the Good; another wills one thing nor is what he wills the Good; a third wills one thing and what he wills is the Good. No, it is not done in that way. The person who wills one thing that is not the Good, he does not truly will one thing. It is a delusion, an illusion, a deception, a self-deception that he wills only one thing. For in his innermost being he is, he is bound to be, double-minded. Therefore the Apostle says, “Purify your hearts you double-minded,” that is, purify your hearts of double-mindedness; in other words, let your hearts in truth will only one thing, for therein is the heart’s purity.

[This excerp, taken from the introduction to the book, Purity of the Heart Is to Will One Thing, is slightly adapted from the English translation by Douglas V. Steere, first published by Harper in 1938.]

A Selection of Quotes from Kierkegaard’s Writings

God creates out of nothing. Wonderful you say. Yes, to be sure, but he does what is still more wonderful: he makes saints out of sinners. – Journals entry, March, 1836

What the age needs is not a genius — it has had geniuses enough, but a martyr, who in order to teach men to obey would himself be obedient unto death. What the age needs is awakening. …I never forget how God helps me and it is therefore my last wish that everything may be to his honor. – Journals entry, 1847

Sin is in itself separation from the good, but despair over sin is separation a second time – The Sickness unto Death, 1849

A person in despair wants despairingly to be himself. But surely if he wants despairingly to be himself, he cannot want to be rid of himself. Yes, or so it seems. But closer observation reveals the contradiction to be still the same. The self which, in his despair, he wants to be, is a self he is not (indeed, to want to be the self he truly is, is the very opposite of despair). – The Sickness unto Death, 1849

Do you not know that there comes a midnight hour when every one has to throw off his mask? Do you believe that life will always let itself be mocked? Do you think you can slip away a little before midnight in order to avoid this? Or are you not terrified by it? I have seen men in real life who so long deceived others that at last their true nature could not reveal itself… In every man there is something which to a certain degree prevents him from becoming perfectly transparent to himself; and this may be the case in so high a degree, he may be so inexplicably woven into relationships of life which extend far beyond himself that he almost cannot reveal himself. But he who cannot reveal himself cannot love, and he who cannot love is the most unhappy man of all.

Top illustration of a man reading the Bible and clasping his heart, from Bigstock.com, © by digitalskillet1, stock photo ID:  171156872

Sören Kierkegaard was a Danish philosopher and theologian. He is considered one of the towering Christian existential thinkers of the mid-nineteenth century. He was born in Copenhegan, Denmark in 1813 and died in 1855 at the age of 42. Among his many books are Training in Christianity, Sickness unto Death, and Fear and Trembling. In 1846 he wrote Purity of Heart Is to Will One Thing as a meditation on repentance and preparing oneself for confession of sin.