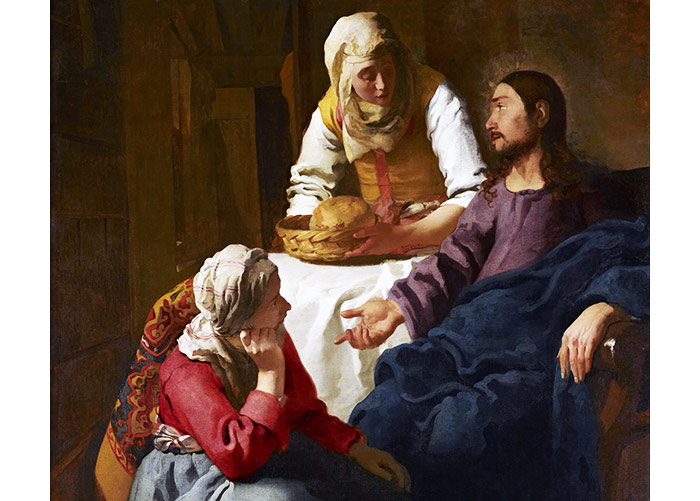 Who am I? Where do I fit in? What can I do to be recognized by others?

In Western society there is a strong value on personal identity. We learn that we are to be assertive and decide what we want and go after it. We are regarded as fools if we let family or religious commitments stand in the way of going anywhere and doing anything to advance our personal careers. Self-fulfillment has become a god, worshipped and sought after.

In most places and at most times in human society, this was not the case. Children took on the name – and the reputations – of their families, and identified with them.

When Abraham’s servant wanted to know who Rebekah was, he did not ask her what her name was, he said, “Tell me whose daughter you are” (Genesis 24:23). Men’s “last names” were really just their father’s names: “Simon, son of John.”

In Scripture, the folks who set out to establish their own selves and their own identities were not highly regarded – for example, the people who settled on the plain in the land of Shinar decided to build a fabulous city and tower (Genesis 11). They said, “Come, let us build ourselves a city, and a tower with its top in the heavens, and let us make a name for ourselves…” God was not pleased, and scattered them so that their Tower of Babel was never completed.

When we become God’s children, and members of his family, we take on his name and identity. Our concern needs to shift from our own reputation to his. We in the western world may find this difficult to embrace, as our society does not value that kind of thinking.

When I look in Scripture and see the people who are highly regarded, I notice that many individuals mentioned there seem like nobodies. Why, for instance, is an entire book of the Bible devoted to Ruth, who’s only claim to fame was that she gave up her identify with her people, took on Naomi’s identity –“your people will be my people, your God, my God” – and worked hard. For this she ended up the great-grandmother of King David, and was awarded a place in the Messianic line.

How about Mary, the mother of Jesus? She was willing to totally lose her identity for the Lord: “Behold, I am the handmaid of the Lord.” The Orthodox Church never even portrays an icon of her without the infant. Orthodox sometimes say that all the hymns sung about the Theotokos (a Greek title which means “God bearer”) can refer to the church as well – truly she is someone who has totally lost her own identity, and because of it many think of her as the most highly regarded human being of all time.

There is only one recorded instance in Scripture in which an apostle raised someone from the dead. What had Tabitha done that was so great that the church in Joppa could not stand to lose her? Was she a gifted healer with a well-known ministry? Did she have a lot of money the church needed? Well, what she did was many “good works and acts of charity.” She made garments for the widows and the poor; in other words, she was a tremendous example of a servant of Christ (Acts 9:32-43).

Jesus tells us that it is by losing our life that we find it (Matthew 10:39). The Lord, of course, was the perfect example of this:

“Have this mind among yourselves, which is yours in Christ Jesus, who, though he was in the form of God, did not count equality with God a thing to be grasped, but emptied himself, taking the form of a servant, being born in the likeness of men. And being found in human form he humbled himself and became obedient unto death, even death on a cross. Therefore God has highly exalted him…” (Philippians 2:5-9).

What about St. Paul, whose writings make up a large portion of the New Testament? What kind of name did he seek for himself?

He even goes so far as to say,

Having not yet attained the spiritual maturity of Ruth, Mary, Tabitha, or Paul, I sometimes find myself influenced by the call of the world to desire recognition and influence. This is especially true when day-to-day life seems too hard: when the needs of others demand that I make some personal sacrifice, when “my” time is being infringed upon, when I feel too tired to really follow the Lord.

It is at times like these it is especially important for me to remember who I am. I am a servant of Jesus Christ, I have been bought with a price, I am a new creation, a daughter of the king of the universe, a member of the body of Christ, one for whom the Lord trampled down death!

What if the Lord’s will for me is to serve in an “unrecognized” way for my whole life? What if I am called to “waste” my life for Jesus?

We have all heard of and admire Mother Theresa; what about her thousands of fellow workers all over the world whose names we do not know and who receive no honor from other people for pouring their lives out for the poor?

I have (not so recently now) read about the “new Serbian martyrs”: 750,000 Orthodox Christian, men, women, and children in Croatia were slaughtered in horrible ways because they were Orthodox. This happened in 1941, but up until now I had never heard of them. Does this mean that their lives and deaths were wasted on the Lord? Perhaps it does in worldly terms, but they, as we, belong to the Lord, and our lives can bring him glory whether we live or die.

It helps me to remember the precious ointment that Mary of Bethany poured on Jesus shortly before he died on the cross. Those around murmured because of the “waste,” but Jesus commends her (Mark 14: John 12). Remembering her example, I can feel free to pour out my life as a precious ointment for him, and not worry that the world disapproves of the waste.

When I am open to the Holy Spirit lovingly whispering these truths to me, the things that the world says I need in order to be fulfilled simply pale and are revealed for what they are: sad replacements for the full life in Christ that I can have if I am willing, and an eternity more abundant that anything I can think or imagine.

Top photo image of Christ in the House with Martha and Mary, painting by Johannes Vermeer, 1655, in the Scottish National Gallery in Edinburgh. from Commons Wikimedia – in the public domain.

Jan Munk is a member of Holy Trinity Greek Orthodox Church in Lansing, Michigan, USA, and a senior woman leader of the Work of Christ Community in Lansing.