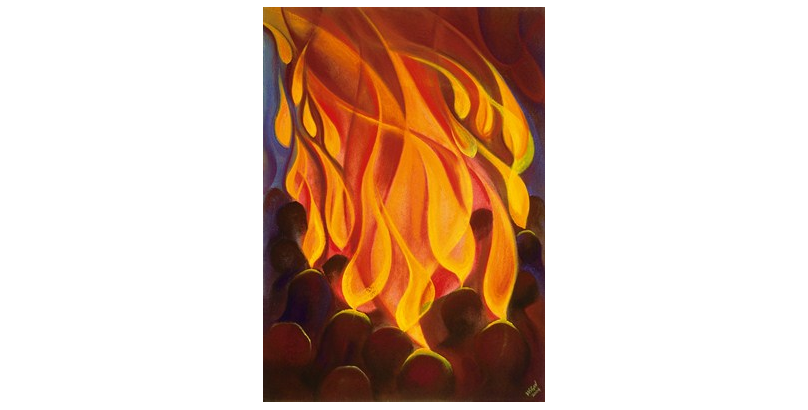 This article is excerpted from Fire on the Earth: What God Is Doing in the World Today, Chapter 1, published in 1983 by Servant Books, Ann Arbor, Michigan, USA. Ralph’s prophetic message is very relevant for Christians today as we seek to better understand and respond to God’s work of purification, judgment, renewal, and mission. Used with permission of the author. – ed.

“I have come to cast fire upon the earth, and would that it were already blazing!” (Luke 12:49)

With those words, Jesus revealed an essential part of his mission and purpose in the world. He echoed the prophecy of John the Baptist:

“He will baptize you with the Holy Spirit and with fire. His winnowing fork is in his hands, and he will clear his threshing floor and gather his wheat into the granary, but the chaff he will burn with unquenchable fire (Matthew 3:10-12).

What is the fire that Jesus was speaking of? It is the fire of God’s burning love for his creation and the fire of his great wrath against all evil that seeks to destroy that creation. It is a sign of God’s intense personal presence that saves and leads to joy those who receive him, but condemns to anguish those who harden their hearts and persist in prideful sin.

Fire of God’s Love and Judgment

Fire is an image the Bible uses throughout its breadth to describe the inner nature of God’s heart in its twofold quality of love and wrath. Throughout the record of thousands of years of God’s action among people, the image of fire appears and reappears with a remarkable consistency of meaning.

It is as if the inspired writers found this basic element, which all people have experienced and understand, almost uniquely capable of describing to every age and culture the reality of God’s presence.

Fire is a manifestation of God’s personal presence to people and of his protection and care for them. His voice spoke to Moses from the burning bush; the children of Israel saw his presence “like a devouring fire on the top of the mountain” (Exodus 24: 17). Fire fell from heaven as a sign of God’s presence in Solomon’s temple on the day of its dedication; it fell again on the day of Pentecost as the Holy Spirit entered the lives of the disciples. At that epochal moment of God’s profound self-giving, there was Spirit and fire.

Fire expresses the intensity of God’s love for people. It is a solemn and powerful love, a love “strong as death … relentless as the grave; its flames are a devouring fire” (Canticle 8: 6). It is a fire of great and awesome holiness, a fire of purification that burns out any sin in the person who has contact with it. Anguish accompanies this purification, like the anguish of Jeremiah who cried out: “Is any suffering like my suffering … when the Lord afflicted me on the day of his blazing wrath” (Lamentations 1:12).

The many expressions that the fire of God’s love and wrath has taken in history will culminate on that great day when all people and nations will be judged by God. Depending on the response they have made to God’s approaches in their lives, they will be ushered into either the profound love and eternal union of the kingdom of God or into the unquench­able torment of hell.

Fire of the Holy Spirit at Pentecost

But the fire of God is not withheld until that final day of judgment. Even now, those who through repentance and faith are joined to God become aglow with his fire, become themselves a manifestation of his fire and light to the world. The fire of God that fell on the day of Pentecost ignited a flame that will never be extinguished. The life, the very Spirit, of God that fell upon that small band of men and women gathered in a room in Jerusalem transformed them.

The fire of God fused them into one people, a body united with one heart and mind. The creative warmth of God radiated from them, healing diseases and reshaping lives. The judgment of God blazed forth from them, driving out evil and convicting men of sin. People saw the face of God revealed in that small band, saw his love and his truth, and came running to be his. Three thousand came on one day, five thousand on another; more were added to their number day by day.

“The love of Christ impels us,” exclaimed Paul (2 Corinthians 5:14), for the fire of God’s love and wrath impelled him and the Christians of his day to enkindle that fire in their world. That happens when the Holy Spirit burns brightly in the hearts of God’s people. The fire of love is made manifest in the midst of creation, tangible in the lives of people. The fire of judgment casts its light on the evil of the world, starkly revealing the truth about sin. This is the very essence of the Church’s mission: to convict the world of its need for salvation, to reveal to the world the love of its Savior. The fire of the Spirit glowing at the heart of the Church is meant to warm and stir life in all the world.

Modern society desperately needs that warmth and life to save it from apathy and despair. Concern and responsibility for other people is giving way in our society to a pre­occupation with personal pleasure; serious economic problems are rousing a spirit of panicked greed.

Our most basic social institutions are threatened: family life is under serious attack; obsessive individualism is replacing community spirit; the unborn, the elderly, the handicapped are threatened with destruction. People in this crumbling world are looking for warmth and hope, but when they look to Christianity, to the body of Christ designed to be light and life to the world, what do they see?

They see a Church torn in fragments by the quarrels and suspicions of hundreds of years. They see new quarrels breaking out, with new divisions following; churches with declining membership and with declining enthusiasm among the members who remain; closing seminaries and an exodus of active ministers. Most importantly, they see Christians whose lives fail to reflect any power or joy greater than their own. They see Christian lives, values, and attitudes that are increasingly identical to those of non-Christians. They see, in short, a feeble, weak Church that reflects to them the very decline and decay they are trying to escape. So they turn away from Christianity and look for vitality in other directions. The message of Christianity – the judgment upon sin, the promise of salvation – goes unheard.

God is rekindling the Fire of his Spirit today

The fire that Jesus cast on the earth to blaze out in the darkness has grown sadly low. But God is moving now, today, to rekindle that fire and fan it to the mighty blaze he desires to see.

He is acting now, across the world, to turn the hearts of his people back to him, to heal the wounds of division, to baptize with the Spirit and with Fire. He intends to restore the full vitality of his people and resurrect the full power of the body of Christ. He is casting down his Fire anew, not for the sake of the Church alone, but in order to draw all people to himself.

God is moving in a remarkable way today. His gifts of power are being restored. His divided people are turning back to one another in forgiveness and love. Bright spots of successful evangelization are appearing. But these things that we see God doing now merely point to what is to come – only give us a picture of the main thrust of God’s action. The things God is doing now are like the cloud “the size of a man’s hand” that Elijah saw rising from the sea to quickly grow to the fullness of a rainstorm (1 Kings 18:44). Kathryn Kuhlman, who has probably seen as much of God’s power in action as any person alive, had said on several occasions that what we are seeing today of God’s power is just the beginning. There’s more; there’s so much more.

I believe the outline of God’s purpose is becoming ever clearer, and that the time is ripe to share an overview, or vision, of the larger dimensions of what we are being caught up in. For in our midst, at this very moment, God is working to restore and reunite his people, to call together an army.

May God be greatly honored and glorified, and may a joyful cloud of praise, as mighty as thunder, proclaim him Lord of all creation and head of the Church!