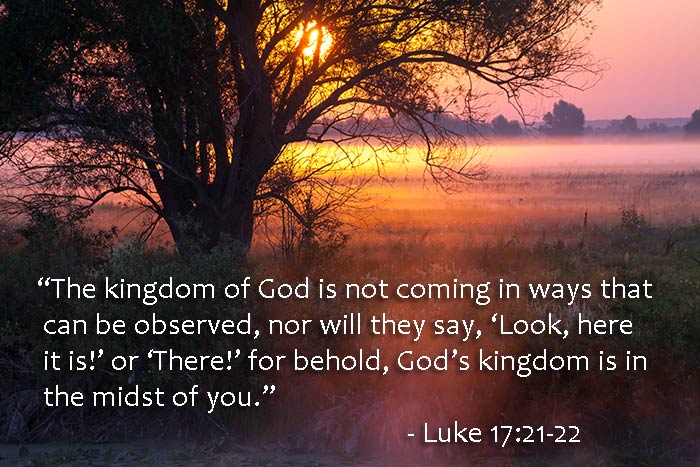 No less significant than the symbol of the Body is the symbol of community as the harbinger of God’s kingdom – as the news that God will triumph over the earth. When God reigns there will be joy and peace and justice. In the same way as each individual living body consists of millions of independent cells, humankind will become one organism. This organism already exists today in the invisible church.

When we acknowledge the reality of this invisible church’s unity and order, we acknowledge at the same time the freedom of the Spirit within that order. The more clearly a community defines its unique task, the more deeply conscious it must be of belonging to the una sancta, the One Church. Because it is part of a larger organism, it needs the give-and-take that comes from serving the whole Body, and it needs to be instructed and guided by the united witness of all those who believe in the church.

The secret of community lies in the freedom of self-determination, in the personal decision of each member to surrender to the whole and, at the same time, to exercise his will for the good. This freedom, without which communal life cannot exist, is not a matter of power exercised by human self-will, just as little as it is a matter of spinelessness or unrestraint. In a community of deeply moved people who believe in the Spirit, the freedom of the individual lives in the free decision of the united will brought about by the Spirit. Working from within each member as the will for the good, freedom becomes unanimity and concord. The will of a man or woman liberated in this way will be directed toward the kingdom, toward God’s unity, and toward the good of the whole human race. As such it becomes life’s most vital and intense energy.

Standing as it does in a world of death, an active will must constantly assert itself against the destructive and enslaving powers of lying, impurity, capitalism, and military force. It is engaged in battle everywhere: against the spirit of murder, against all hostility (including the venom of the taunting, quarrelling tongue), against all the wrong and injustice people do to each other. That is, it fights in public as well as in private life against the very nature of hatred and death, and against all that opposes community. The call to freedom is a call to a battle without pause, a war without respite. Those who are called to it must be continually alert. They need not only the greatest willpower they themselves can muster, but also the aid of every other power yielded them by God, in order to meet the plight of the oppressed, to stand with the poor, and to fight against all evil in themselves and in the world around them.

This fight against evil must be waged more strongly within a community than against the world outside, but it must be waged even more relentlessly within each individual. In community, it is fought by the spirit of the church, which takes its foothold in each individual and fights the old Adam within him from the position of the new. In this way all softness, all flabby indulgence, is overcome by the burning power of love.

We must live in community because the struggle of life against death demands united ranks of souls and bodies that can be mobilized wherever death threatens life.

Community of goods presupposes the willingness of each individual member to turn over unconditionally to the common household whatever he acquires in the way of income or property, large or small. Yet even the community does not regard itself as the corporate owner of its inventory and enterprises. Rather, it acts as a trustee of the assets it holds for the common good of all, and for this reason it keeps its door open to all. By the same token it requires for its decision-making undisturbed unanimity in the Spirit.

Loyalty to the end

It is clear that the war of liberation for unity and for the fullness of love is being fought on many fronts with many different weapons. So too, the work of community finds expression in many different ways because the Spirit is rich. But there is a certainty of purpose for every stretch of the way we are called to go, and when we possess this certainty we will be given the strength for loyalty and unerring clarity, even in small things, to the very end. Nothing can be entrusted to the person who cannot hold out. Only those who stand firm can bear the standard.

Subordination to the whole

There is no great commission without a specific, clearly defined task. Yet it is of decisive importance that any special task lead only to Christ – that it truly serves the whole, the church, the coming kingdom. Wherever people see their task as something special in itself, they will go astray. But when a person serves the whole, even if in his special place and in his own particular way, he can well say, “I belong to God and to life in community,” or to God and to any other calling. Before our human service can become divine service, however, we must recognize how small and limited it is in the face of the whole.

A special calling – living in community, for instance – must never be confused with the church of Christ itself. Life in community means discipline in community, education in community, and continual training for the discipleship of Christ. Yet the mystery of the church is something different from this – something greater. It is God’s life, and coming from him it penetrates community. This penetration of the divine into the human occurs whenever the tension of desperate yearning produces an openness and readiness in which God alone may act and speak. At such moments a community can be commissioned by the invisible church and given certainty for a specific mission: to speak and act – albeit without mistaking itself for the church – in the name of the church.

Community is a call to love and unity

The church we believe in lives in the Holy Spirit. The Spirit we believe in bears the church within itself. This church of the Spirit will give life to the future unity of humankind. It gives life already now to all truly living communities. The foundation and basic element of every community is not merely the combination of its members but simply and solely the unity of the Holy Spirit, for the true church is present there.

An organism becomes a unit through the unity of consciousness brought about by the spirit that animates it. It is the same in a believing community. The future unity of humankind, when God alone will rule, is ensured by the Holy Spirit. For this Spirit is the coming leader and Lord himself. The only thing we can hold on to here and now, the only thing we can already perceive of this great future of love and unity, is the Spirit. Faith in the Spirit is faith in the church and faith in the kingdom.

Excerpt from Why We Live in Community, by Eberhard Arnold, first published in German in 1925. First English edition in 1967 by (c) Plough Publishing House.

Eberhard Arnold (1883-1935) founded the Bruderhof in 1920 along with his wife Emmy and her sister Else von Hollander. The Bruderhof began in 1920 in Germany when a group of Christians, seeking answers to the devastation of post-war society, founded a community based on the belief that Jesus’ words in the Gospels are a guide to daily living. Today the Bruderhof consists of over 2,600 men, women, and children living in twenty-three communal settlements of varying sizes on four continents.